What on Earth Is Going On in The House of Commons?

Over the past three days, the Firestone House of Representatives has been undergoing its Speaker of the House election. Responsible for holding these elections is the honorable Governor AestheticallyHappy.

As is expected with everything Firestone, everything that could have gone wrong did go wrong and more.

AestheticallyHappy opened the Speaker election shortly after the Representatives completed their oaths, prompting the declaration and speeches of ADMIRAL_RICKY, L_3ee, and CanadlanLaw. Declarations were open for 48 hours (this is important so remember this).

Following declarations and speeches, AestheticallyHappy made the decision to open a phase for questioning. Now personally, I agree and I assume all citizens agree that questioning is good. Why wouldn’t Representatives want to question the next Speaker of the House, wouldn’t they want to make an informed decision and make sure that the right candidate is being chosen, for their sake and for the sake of their constituents (we will revisit this)? The questioning was opened for 16 hours under the following conditions:

Immediately, Representatives who already made up their minds in closed doors without deliberation, looking at other candidates, hearing speeches, or waiting for public feedback, would complain, asking for there to be no questioning and instead automatic voting. (Bit undemocratic innit).

Shortly after the questioning commenced, one candidate, in particular, was absolutely getting destroyed, prompting that candidate and his supporters to motion to PQ. 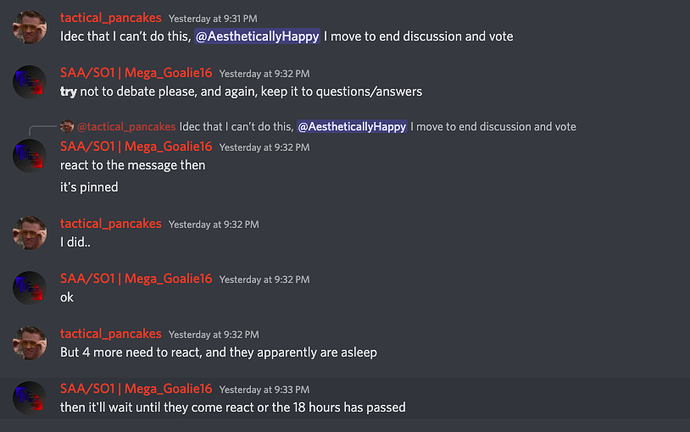 Both the person motioning and the Sergeant at Arms recognize that the motion in fact goes against the Governor’s guidelines and that it would not work, however the Governor would make a 180 turn and instead recognize the motion. 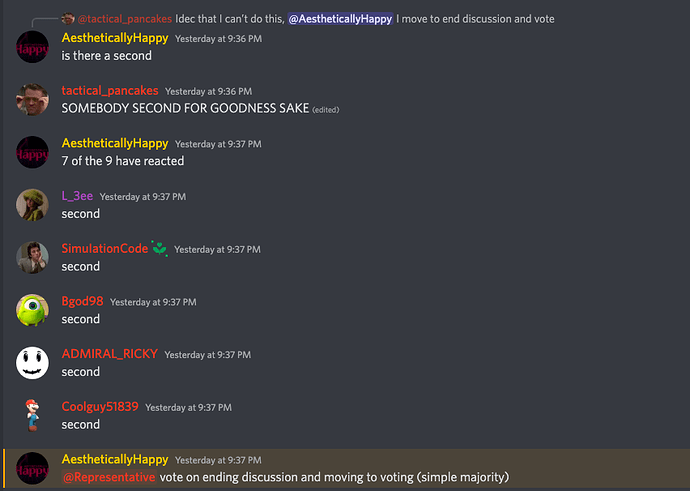 Once again, those in favor of skipping questioning and instead voting based on friendship and association are in favor of this motion. The Governor recognizes the motions and proclaims that in order to pass, it needs a simple majority. (Remember this, it’s important

Afterwards, I notioned to the Governor that he is in fact not following the rules of basic motions (the rules he and other congresspeople are very well aware of) and that a Motion to End Debate (Motion to PQ) requires a supermajority not a simple majority. This prompted the response most indicative of how little trust citizens can have in our government. 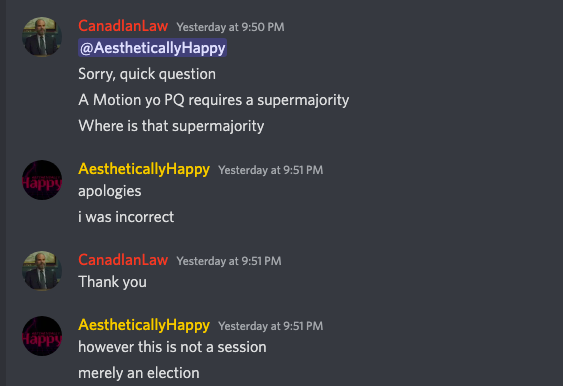 After pointing out the Governor’s mistake, non-aggressively and before he has made a decision, he instead continues.

Afterward, I would notify the Governor in DMs (as to avoid public confrontation) that the motion DID NOT even pass, only receiving 5 Ayes when it needed 6. 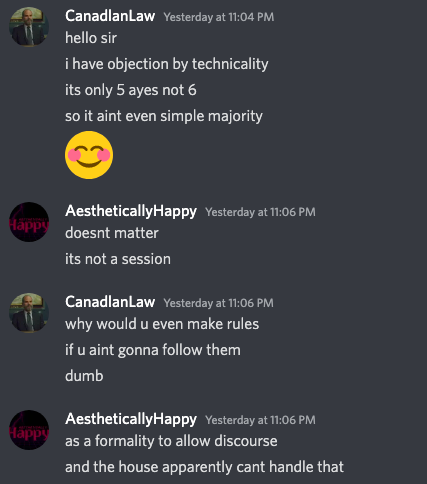 The Governor acknowledges that it did not in fact reach a majority, as well as that he is simply choosing to follow whatever rules he wants, whenever he pleases, giving him total control over the results. The rules created to create fairness at the most basic levels are intentionally ignored.

The Governor then proceeds to open voting for only 8 hours. Remember, declarations were open for 48 hours, questioning was open for 18 hours, but voting is only open for 8 hours? Voting started at 10 PM EST and was planned to end at 6 AM EST. The most obscure times were chosen for this election, especially when the majority of those voting are American and would not be online during those times.

I would then drop out of the race at 3 AM EST and instead vote for Admiral_Ricky. At this time, most of the House, including the Governor, was offline and would not see my decision until the morning. At 6 AM EST, the Governor would instead not wake up (as expected when you set such an obscure time) and 3 of 11 house members would not cast a vote until the morning (Jackfruitism, Crankyluke, and connor).

In the morning, cranky and connor would vote and 1 person would switch their vote, making it 6-4 in favor of RICKY. The Governor would call it in favor of RICKY and we would all proceed happily-ever-after… wrong.

The Governor would REVERSE his decision, instead claiming that L_3ee had the majority when the voting was supposed to close. Keep in mind, the Governor has ignored all other times and guidelines up until this moment, choosing what was easier for him or simply made more sense.

After being pressed by both sides, including those who did not support RICKY, it would yield the following responses: 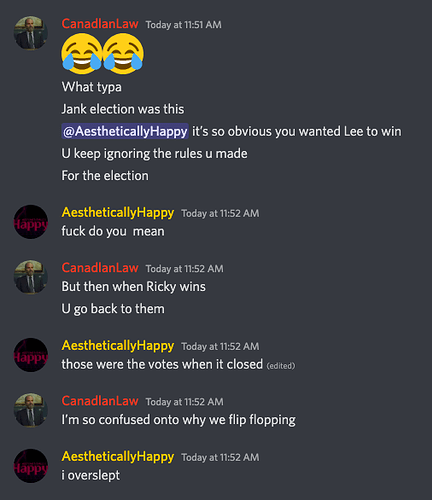 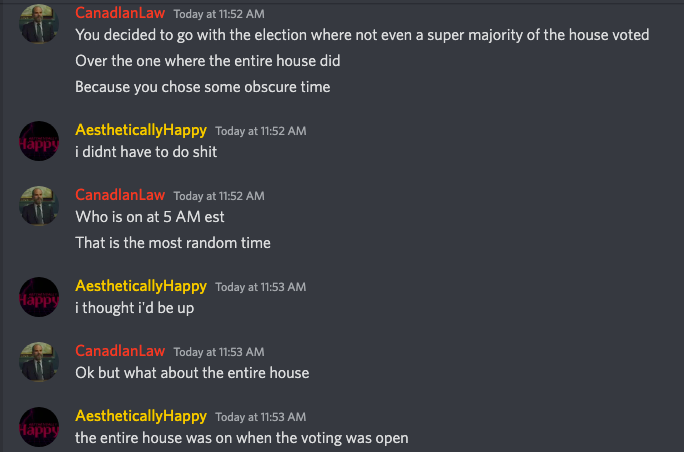 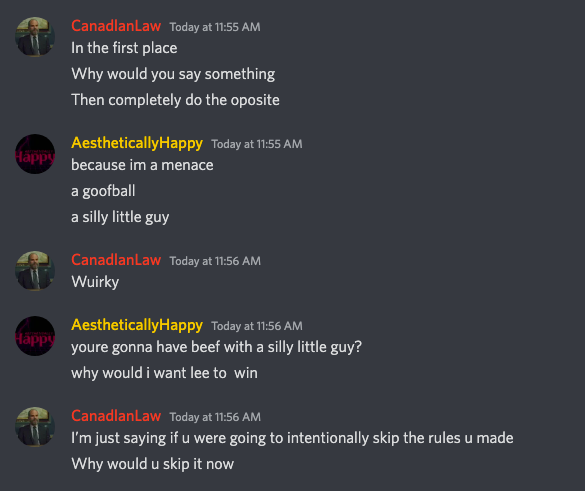 In the 10th mistake of this election, the Governor also admits he had the votes incorrect, assuming that a majority of the house supported L_3ee, when in fact it was not a majority and one of the votes was a non-house member with access. (It takes 10 seconds to see that) 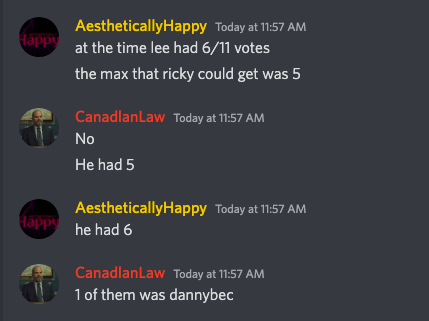 The Governor would continue to poorly justify his obvious severe lapse in judgement, even when confronted by members who supported the candidate the election was skewed towards. 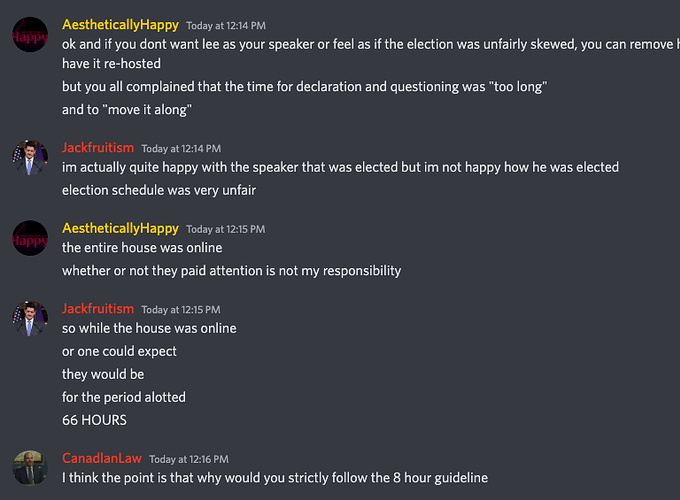 Completely skewed election all behind the noses of the citizens because, surprise surprise, the people begging for your vote are the same people willing to completely subjugate your voice when it matters.

14 Likes
Should Governor AestheticallyHappy resign?
Should Crankyluke be expelled from the House?
crankyluke November 6, 2022, 7:13pm #3

Another controversy… caused by the SAME GOVERNOR! This needs to end…

I will be reading this soon,

Office of Philip_Forth will be making a formal comment soon.

Never would ASH1835 say this… Bring him back!

The Governor is a power-hungry tyrant.

A similar situation recently happened in the Senate involving Lieutenant Governor sharkfish82, who also is a power-hungry tyrant. Sharkfish82 would refuse to recognize PPT SirCalebXVI and also attempt to delay, act AFK, and adjourn the session when a bill was attempted to pass that would give more power to PPT.

Do not be mistaken, these two are power-hungry tyrants that should face impeachment. Firestone would be in a better state if Former Governor Ash1835 won the election. All of this problem comes from the power-hungry tyrants rooted into the system known as the Firestone National Guard. The Firestone National Guard is a corrupt cyborg alien species that are hungry for power. These cyborg aliens were the reason that these two tyrants won in the election.

DO NOT BE FOOLED BY THESE TWO. 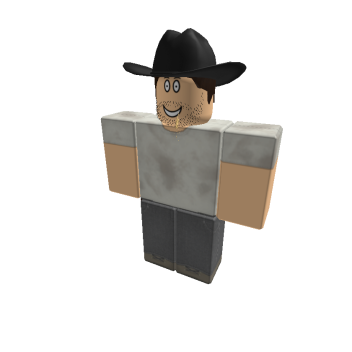 dps will be taking over immediately.

The government wants to know everything we do. They use mobile apps like Pokemon Go to track everyone’s movements so that they can compile a database of all that info. They track your Reddit and social media history, too. They’re using all of this information to figure out when people are using public bathrooms, where they pump government-sponsored suppression drugs through the air vents (why do you think so many bathrooms have vents these days?).

Now, if you look at the soil around any large US city with a big, underground homosexual population–Des Moines, Iowa, perfect example. Look at the soil around Des Moines. You can’t build on it, you can’t grow anything on it. The government says it’s due to poor farming. But I know what’s really going on. I know it’s the queers. They’re in it with the aliens. They’re building landing strips for gay Martians.

WE AS CITIZENS NEED TO FIGHT BACK

It’s almost like something (nearly) EXACTLY like this happened in the most recent President pro tempore election?!?!

What an odd coincidence.

I want ash back

AestheticallyHappy was thrust into the Governor position with little knowledge of state government, showing a complete disregard for procedure, rules, and operations. I don’t believe this is on purpose by the Governor, this is blatant incompetence, and he is not fit to serve in the position of Governor. Not to mention 2/3 of individuals in the State of Firestone believe he should’ve resigned after his gross mismanagement of the National Guard, which continues to this day. On top of that, he has had the most scandalous term as Governor compared to past administrations that go back years. Not to mention my old friend Lieutenant Governor sharkfish82, a great guy but his term this time around has been atrocious. Childish behavior like pretending to be AFK in sessions, refusing to recognize SirCalebXVI as President Pro Tempore, and then attempting to throw him out of his position.

Some of this incompetence also falls on the chambers of congress, why did it take weeks to recognize the possibility of impeachment, and after it was proposed why were the articles seemingly retired almost immediately, and nothing ever reached the debate floor? The State Government has failed to represent the best interests of the State of Firestone on numerous occasions.

I’m not going to claim to be a saving grace and hero when it comes to this situation. Teddy & I didn’t put a trying effort into the campaign for re-election, and I sincerely apologize to the people of Firestone that we’re having to endure the consequence of an incompetent administration that is actively leading the State down a dead end. But under a Teddy administration or an Ash administration, I guarantee you this rabbit hole that the State has seemingly fallen into wouldn’t have occurred in the slightest.

I call on Governor AestheticallyHappy and Lieutenant Governor Sharkfish82 to resign. Incompetence, borderline corruption, and shady backroom deals believe it or not should have no place in our political system. If either of you has the gonads, step down and end this tire fire that you keep throwing lighter fluid on. If they can’t do that, I ask Congress to finally stop this clown show and write up articles of impeachment.

another day another drama