I am JoshLocke, I’ve been a member of the Firestone community since its beginning back in 2016. I’m currently an incumbent Senator, as well as member of the Firestone National Guard’s 16th Combat Aviation Battalion, The Department of Justice, and The Department of State. I believe that my wealth of experience within this state makes me a great candidate for re-election, and I hope to garner your support in this upcoming election!

PLANS
During this next term I plan on working to bring a majority of our legislation up to date to match v3. During this term I would also like to work towards establishing the Easy Access Legislation Project as the official form of all laws within the State of Firestone. Opening a form to allow for a more direct line of communication with citizens to submit their ideas for legislation will also be a major priority.

Glory to the blue lobster 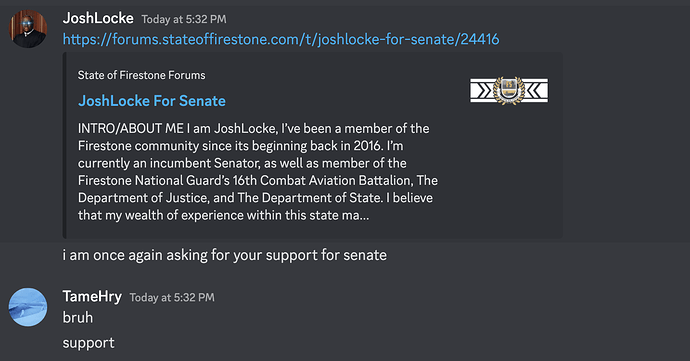 i endorse you you’ve proved yourself to be more than capable this term, it’s been an honor working with you and you’ve done a lot of good for the legislature.

much appreciated my man & likewise!