What happened to V3?

Before you feel like this will explain everything, this post is merely filled with my thoughts and half discussions with people about V3 and its lack of progress.

In the Firestone discord, “V3” has been mentioned 25,180 times in one form or another, and the earliest time it was mentioned, 13th of June 2017. And the first bit of confirmation that V3 was in the works was released by Fergie, the 7th of July 2017: 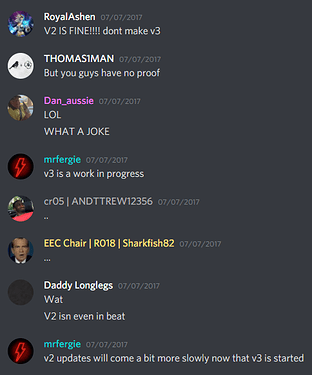 Ever since that day, I can say with a large degree of certainty that the community’s reception to V3 has dwindled, from people claiming broken promises, to even just below the post by MrFergie on the same day by Sharkfish:

How wrong he was, V2 was still clearly in the lime light, it’s Firestone’s crowning glory. For as incredibly and boundary pushing was V1, V2 was were things took off. Where streamers discovered this community, where we reached the front page for numerous things, where the player-base began to exponentially grow. Which is exactly why I feel, V3 has been pushed back even further.

V2 is a moneymaking machine, and Roblox isn’t the same as it was when it released. No longer do we see people make the front page with a variant of SFoTH or another Ro-pokemon clone, it’s clear cut advertiser friendly content, or in other words, moneymaking machines. And the introduction of DevEx has most definitely helped boost this goal. By no means is this me attacking people for wanting a payout, at the end of the day the work these developers do does warrant incredible payment, but it can also stagnate a development cycle.

A leap but I hope the idea is still there, look at GTA 5, Rockstar’s crowning glory. 110 Million Copies sold internationally, across nearly 3 generations of hardware. During this life cycle they also released Red Dead Redemption 2, a positively received game owing to it’s incredible detailing, story line, and amazing graphics. But saw it’s downfall when it’s online variant seemed to be getting silent patches to make the player want to purchase more in game currency, where hunting rates were lowered, and costs rose for items like ammo and assorted others. The same system that plagues GTA: Online, found its way into the heart of another Rockstar project, and it feels like it’s creeping into Firestone V2.

For as much as I hope to doubt this is entirely the reason for V3’s delay, the recent addition of new boats back into the game hasn’t really helped the case for it not being that reason. For as incredible as it is to have boats back into V2, there was clearly an attempt to gain some serious coin off the update.

The recently added Yacht costs $285500, which is obviously the most expensive boat we have in game. The big thing is, it was added after the main boat update, people were hyped for the Speedboat and Fishing Boat, $64075, and $52250 respectively. People quite obviously could’ve piled together to save up for the Yacht if they knew it existed, but it came out later, leaving the only option to buy in game currency, after buying Robux. 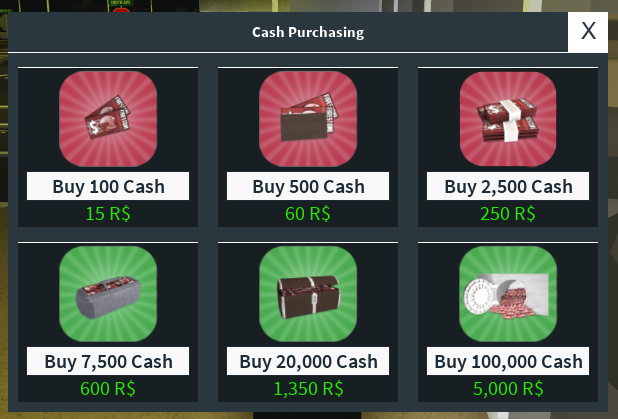 Giving us a grand total of either: AUS$244.96 or AUS$245.97 to purchase the Yacht starting from nothing. It also serves purely to carry passengers with no real benefit, unlike the Yacht in GTA:Online where you can at least do missions. This is a tangent but during the duration of all this taking place, V3 has been “updated” in the background, purely.

Whenever questioned about why V3 hasn’t been updated it’s always, “It’s been updated, just not pushed to be released for testing” now for something expected to be the new flagship game for Firestone, you’d assume we’d want it tested inside and out, every single way from Sunday, but no, V2 instead gets updated with new/old features being reworked. I really don’t have any issue with this, I got V2 Early access and V3 early access, and came along from Norfolk, I understand that development takes time. But this feels like a drastic shift.

A few months ago, Envelope and Path I believe commented that they’d be the only ones touching up V2 and then focusing on V3 development, that it was close. But the actions of late don’t seem to match up. V3 still feels like a world away, with broken server joining, cars which haven’t been updated to the newest chassis at all even though there have been leaps and bounds with it’s development.

V2 is a moneymaker, it’s successful at what it does and seemingly does it well. Even where patch jobs are needed it’s still this community’s heart. Maybe I’m clouded by the fog of years past, seeing trailers for Norfolks revival of an AED coming to life requesting to shock and cutting to black. Maybe it’s the years put into this community that make me want to believe that V3 is truly coming, but we need another year on it. This is not a call for V3 to just be released overnight, but just saying “It’s happening, don’t worry, V2 is getting polished up and V3 is still being worked on” would be enough to quell the fears of a lot of people, myself very much included.

But, maybe Chuba is right, maybe V2 is truly their final project.

In my opinion, there’s no money that they’re trying to make here. It’s more of them trying to bring in more interesting/fun things to V2 while we wait on V3. But I do see your side of it.

I feel like v3 was really over exaggerated. I honestly don’t care for it anymore because I grew out of v3 and Roblox in general after waiting so long. Fed has said multiple times that “this is the last v2 update and now we are on full steam ahead for v3 (since like 2018)” At this point, even if v3 was released in the next 2 hours magically, I won’t be able to experience it because of life and I’m sure thats the same for most of us. I’m in the discord because I love the community so much that its hard to leave behind no matter how much I tried to avoid it.

they may of published a new update for v3 since it was updated earlier. but it broke access to the game and as such people who own the gamepass have trouble accessing the v3 game after joining the hub, where it says you require a gamepass or something along those lines to join V3

v3 still has tons of stuff left to be developed

It’s been “we’re all in for V3 now” for awhile… then came new cars, businesses, boats, roads…

What would be the point in that? V3 is far more superior. I have to admit, I like fergies style of building vehicles better though, no offense to the v3 car dev, just my personal taste

the last time i checked, a developer said v3 would be done by “march.” and that was said last December

v2 will get boring as the time goes on, for those who want v2 to stay forever.

No, all joking aside. Stapleton County Version Three is a fucking pipedream at this point. I’m 100% convinced that i’ll have great grandkids by the time that shit releases and even then I bet the Heat Death of the Universe will arrive faster then V3 Late Alpha.

Btw, we have nothing against the developers and founders. We know you guys are working your butts off and you have lifes. It’s just that we been waiting so long that it’s hard to keep our thoughts inside forever.

yeah he is right, I played V3 a few days ago and compared to the streams fed/parrots/cenosity did, it looks a LOT more different

making V3 was a mistake. They should have focused on remastering V2 instead. in my opinion Firestone became popular with v2, so many memories. but yeah we can’t even play v3 lol? what did I pay 1k roux for? kinda feel scammed but idk that’s just me. they should have/should just get someone to do occasional visionary v2 updates like I suggested not long ago

I’m scared that when V3 does release that businesses and other non-priority departments will have to once again wait a long time to be recognized again.

DOBW has existed since the beginning of V2 to now, with a closing break in the middle, and we are just now getting boats and a purpose within the county.

Businesses for example didn’t have anything for the longest time until just a few months ago with the addition of the Quest Jeeps, Capital Gas refinery and trucks, then the decals for the other businesses.

This is the most fun I have had with V2 so far. I feel like right now the developers and founders are helping the community grow when they implement theses updates like boats and businesses. If we were to shutdown V2 and move to V3 I would be very scared and hesitant cause I wouldn’t want businesses or other non-priority groups to be left out for another 4 years.

ikr the development is just so much more superior