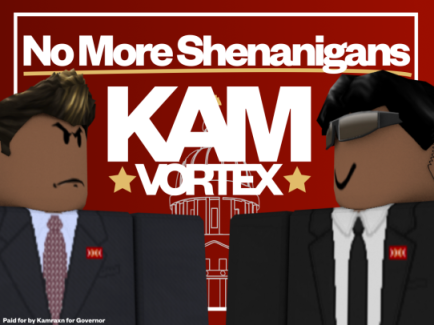 Kamraxn is a dedicated member of the Firestone government who has served the state for over three years. Currently the Secretary of Public Safety, he is responsible for guiding the public safety policy and ensuring the effective operation of our law enforcement agencies and public and fire rescue services. He is also a licensed attorney here in Firestone. He has served the people of Firestone in various of ways, most notably serving as the Redwood Mayor and the Prominence Chairperson. During his tenure, he helped businesses thrive, and ensured recognition was given. He also values the safety of the people, serving for over a year within the State Patrol as the Lieutenant of Training and serving in the National Guard as a Sergeant to protect his state, having multiple notable decorations and accomplishments in each of his positions. Kamraxn understands the importance of public safety, having a safe and trustable government that people can look to for assistance and safety, and providing equal opportunities to everyone. He will ensure the Firestone government is one transparent government and one that will only serve the people.

iiVortex_RBLX is a public figure, who currently serves as the County Executive. Vortex has an exceptional resume in public service, including serving as the Speaker pro tempore of the House, Mayor of Prominence for over a year consecutively, a Senator, and much more. He has devoted his career to public service and understands the importance of it. He is the right person to become the future President of the Senate, and his resume speaks for itself in keeping chambers active and productive. Vortex will ensure our Senate remains active, and gets legislation through that is needed for the people of Firestone. He also understands the importance of businesses, having assisted multiple businesses during his tenure in both the chambers of the legislative branch and whilst serving as Mayor. He and Kamraxn will ensure Firestone is on the right path, ensuring the future is filled with brightness.

Plans for the Government

Kamraxn & Vortex both hope to count on your support during this election. We intend deliver a transparent government, who will provide safety and security for the people of Firestone. If you have any questions about the campaign, you may ask them direcly via our campaign Discord or through here on the forum.

If you wish to be apart of our campaign trail, please join the campaign Discord and contact the Campaign Manager.

SUPPORT! i wonder who made those graphics . . .

I rarely publicly endorse candidates, however I believe that these two candidates can greatly improve the state and would be an amazing fit for Governor and Lieutenant Governor. Support.

including serving as the Speaker pro tempore of the House

VERY INACTIVE IN THIS POSITION! HOW CAN YOU ASSURE US THAT HISTORY WON’T REPEAT ITSELF?

I rarely publicly endorse candidates, however I believe that these two candidates can greatly improve the state and would be an amazing fit for Governor and Lieutenant Governor. Support.

The lots of love (LOL) is much appreciated !

i support this support

man the infantry sure is special sometimes