A statement about my dismissal

I’ll keep this short since I’m not so well and I’m on my phone.

In this “statement”, “post”, whatever you want to call it, I’ll be addressing - no, dissecting - the points made in the letter addressed to me:

Point 1
“With the foreign policy of our request being late”
The foreign policy wasn’t requested by the administration, I in fact brought it upon myself to do it. Yes, it was late, by a week, and that is simply due to resignations on our Advisory Board - I wanted to replace the advisors, so I could get all the feedback I could on the foreign policy, which they did provide. The only reason it was so late was because of Background Checks by the Intelligence Office being severely delayed. Oh and in fact, the foreign policy was ready for Josh to read today, but of course that won’t happen, and apparently my hard work is being disregarded.
Oh well, guess me trying to get something done to a high standard is uhhh, not good?

Point 2
“one that is not of sufficient content to the administration.”
The Governor, Chief of Staff, or anyone else for that matter, never spoke to me about what should be in the foreign policy. Sufficient obviously means that there’s not enough of it, yet this foreign policy is longer than the old one, with a new section. But okay?

Point 3
Speaking of talking.
Did I mention that Josh never spoke to me? Yeah, he didn’t raise any activity concerns with me either. Cabinet reports have been sent in, I’ve been communicating with my command over discord. If he had concerns, he should have taken them up with me, in my opinion, instead.

Point 4
“in the request that it be rewritten, it
did not seem to meet the standard of which we were looking for in its material.”
Like I said, they never asked for it to be rewritten. And they never gave me a list of what they would like. And they never even tried to discuss it with me.

Let’s see what the man responds with.
I’ll be staying as CCRA Manager, but don’t expect any of my fancy announcements about updates to the criminal code anymore.

“Do what you feel in your heart to be right – for you’ll be criticized anyway.”― Eleanor Roosevelt

This is both mad cool but lacks evidence. For as much as I believe you wolf, what about the 30% who wont, we need the dms good sire. 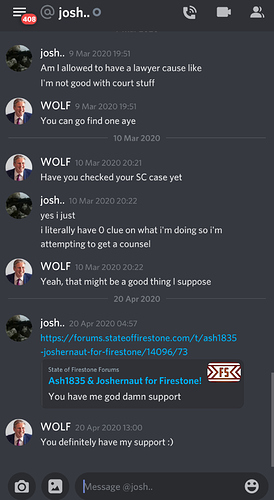 posting for wolf because he can’t upload on mobile

NDA, for anyone not in the legal business is Non-Disclosure Agreement.

I wish you the best of luck Wolf, thank you for sharing this information.

It’s been an honour to work with New York, despite the difficulties.

I had a feeling a little honestly, getting vibes of when ceno was yeeted so I may or may not accept the next nomination or may do something else to address this

I have no idea what this is about but o7

speaking as someone who has been falsely terminated from the cabinet before, it is incredibly frustrating to do absolutely nothing wrong and be terminated without the governor even speaking to you about it beforehand. in my case, i was terminated without a conversation for informing my employee that he was violating the law and advising him to refrain from doing so because i didnt want a case to be mistrialed.

it is extremely disappointing when a governor fails the most basic duty of communication. one of his biggest responsibilities is to be the primary liaison between the people and the government, and in this action he has shown that he has precisely zero clue what is going on in his administration and that he will not make any effort to attempt to find out.

all i know after this is that it will be extremely difficult for josh to ever get my vote again.

what was your former cabinet position

@Joshernaut explanation pls, you didn’t dm him, and you fired him for not doing something when he was asleep, not to mention it was his idea to rewrite it?