Basically, People are reporting / taking people to court for the pettiest things. For Example: Harry_Hole vs Jahan22 / Harry_Hole VS Depiremlgmemer

For Authorizes, court case its kinda petty too, He can prob talk to the court case in the comments.

Both of these cases were already in session when said person decided to go to try to get Myself and Jahan22 DPS’d which eventually the cases got dismissed. This just needs to be dealt with, it ruins Firestone with the amount of petty court cases like these 2. Both times the plaintiff was committing crimes and he got caught.

Also, these petty court cases ruin reputations and can get you fired from a department.I feel that they shouldn’t accept these cases, not sure if anyone agrees with this but it gets hella annoying

Edit: They should be required to have better evidence than 20 Seconds before the incident cause something else could’ve happened before and we wouldn’t know

Thanks for listening to me

I also feel like court cases take a while, and end up with people for HOURS in jail doing nothing. DOC is even more fucking useless, if you try to escape BLACKLIST.

idk how u suggest we ‘deal with it’

we dont decide which court cases are allowed and which arent

that would ruin the entire point

when theres no legal basis to dismiss a claim it goes to trial, if you wanna complain do it to congress

Totally Agree, I am a cop with a court case against me and it just ruins FS cause its hella annoying

I mean true, but they should be required to have better evidence.

IDK I think false arrest is a big deal

Agreed, BUT It depends what happened before. 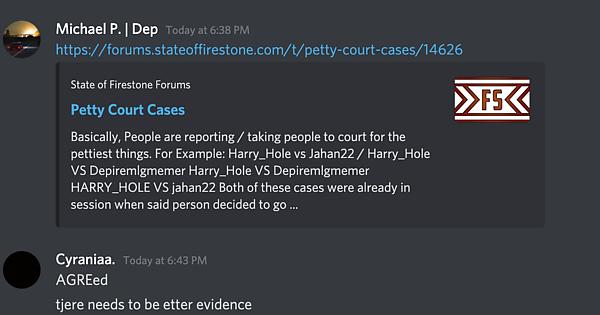 Cyraniaa agrees with me, and states they need better evidence.

yess girl, istg, i finna got sued for “false arrest” by some guy without discord, like girl what, he clearly did the crime and like they record after they do the crime, like, istg

You’re acting like people are getting immediately punished when a court case is filed. We have the due process of law for a reason. If a person is convicted in court, then it has been found beyond any reasonable doubt that that person has in fact done a bad. Nobody is punished prior to a case being heard, and to limit a person’s ability to file a case is just plain stupid.

Obviously, you have a due process but as I added onto they need better evidence then a 20 seconds video before the arrest.

The burden of proof exists for that very reason. It’s not there to limit people from filing cases, it’s there to ensure that the winner of a court case is truly in the right.

Correct, I understand that, what Im trying to say is like some people are doing it just to ruin a career.

And those careers aren’t being ruined if they haven’t been found guilty, so there’s no point in making it harder for citizens to file court cases.

(NOT SAYING I DO OR DONT AGREE WITH THE POST BUT…)

like what exactly is this proving? u just saying “no i didnt” isnt gonna get you anywhere

THIS IS WHAT I MEAN, ITS HELLA ANNOYING

also, something funny i receive on the daily, you are NOT REQUIRED TO SAY “RIGHTS IN DOC”, THAT IS LITERALLY SO ANNOYING WHEN PEOPLE TRY TO SUE YOU FOR NOT SAYING “RIGHTS IN DOC”

I feel that they shouldn’t accept these cases

We don’t have the legal authority to accept and deny cases as we please unless they fail to meet some lawful standard, such as (a) not providing evidence or (b) having no lawful charge. Otherwise, we must proceed with every single case which is filed. If you want less “petty court cases,” then you have to convince the people filing them.

Feel free to contact me with any questions: princess skye!!#9640

Ah thanks for replaying, Ill contact you at a later time with some questions I come up with.