Noobsiance for Senate: A Stronger Firestone

Thanks for taking the time to read my message. As you can see from the heading, I am running for Senate. My time in Firestone has been spent getting to know new people and making friends. Over the last few months, I have become more involved in the community. During this time, I have been involved in multiple departments and have been elected to the Prominence District Council. While I was there, I submitted several bills to the Council. Recently, I co-sponsored three bills in Congress, each with an important purpose. Throughout my tenure as Senator, I will propose and co-sponsor bills I believe will help Firestone.

Having become more involved in the community, I have been able to accomplish several things in this state.

I would like to mention that I am a recruit in the FFA and a student pilot in the DoA, although these do not count as experience to me.

During my tenure as a Senator, I will propose laws with a purpose. Several bills have been proposed in this state recently that serve little to no purpose. Whenever I write a bill, I will keep in mind the impact it will have on whom and what. To determine public approval of certain issues, I will also conduct polls. This will help increase community engagement within the Senate. I will share my ideas with the Senate leadership on possible ways to engage with the community.

I have noticed the House has been inactive lately, and that has caused the Senate to pass fewer bills. As a Senator, I hope to work with representatives on bills to make sure they serve a purpose, thus cutting down on criticism, and allowing the House to pass more bills without extensive doubt from other representatives.

I would like to thank you for reading this far. I look forward to seeing your support. I have lots of plans for the Senate and hope that I can achieve those things with your help. I am always open to listening to your thoughts and ideas, so don’t hesitate to ask.

Any questions or concerns can be sent to Noobsiance#7058 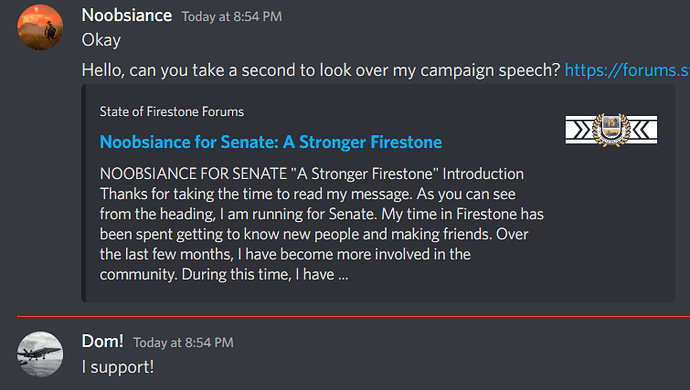 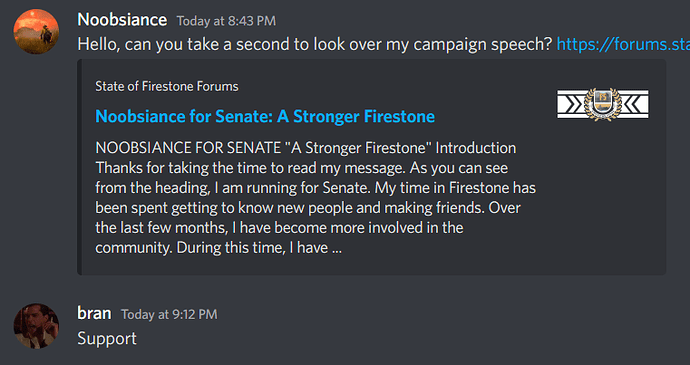 it seems you are a good council man…
support