I honestly believe VAing shouldn’t immediately authorize full lethal force (unless they slam into you on the sidewalk, hit a scene, etcetc)

problem is you have to draw the line in legal text, which is difficult and would require LEOs to have a lot of faith in their understanding and judgement of the law and situation

You running over an officer (or attempting) is the fault of only your own.

You can report this to their command, I am pretty sure POST doesn’t teach this and the only time I ever stand in front of a vehicle is as DOC to prevent it from slamming into our checkpoint.

If they weren’t able to use lethal force it’d be very hard to maintain a roleplaying atmosphere.

i mean to be honest you basically could,

try it as 2nd degree murder i suppose

manslaughter or negligent homicide could be a better charge to try

manslaughter there is no premeditation or malicious intent.

malicious intent is “without just cause or reason, to commit a wrongful act that will result in harm to another. it is the intent to harm or do some evil purpose.”

i think 2nd deg murder and negligent could work fine

im not using US law.

the definition of malicius intent i put isn’t even u.s law.

nor is the 2nd degree.

the 2nd degree definition is taken from the crim code. 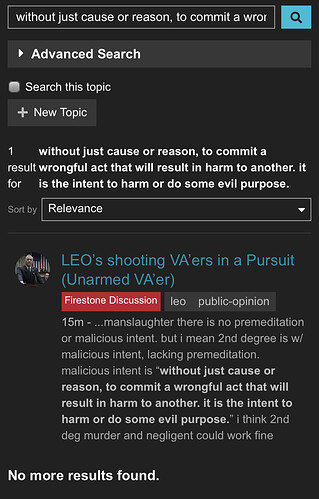 ok lets not use a .com

lets use a .edu of cornell law school

no bill establishes it, and ever will.

and it doesnt have to be a definition for the criminal code.

the 2nd degree definition is taken from the crim code

THAT I USED! in this FORUM!!

Second degree murder shall be the act of directly causing a death of another person with malicious intent, lacking premeditation.

we were talking about this

he quoted something then tried to twist it so, my bad for that.

and a .com website isn’t to be trusted as u.s law

courts would use this ^