Is Firestone Starting To Fall Down?

Firestone has been a group since 2016 and has grown and rapidly expanded into a Mega State. At this point I think Firestone is starting to fall down. LEO’s no longer RP. The scenes that happen are unrealistic. It makes some people want to Leave Firestone. Sadly, Fedora and the co-owners have tried to curve FRP but have failed. Many people who have formed Firestone have left or retired. FS is on the verge of falling down and pretty much all of Roblox RP. I have seen many people quit FS and Roblox RP entirely. The Government is useless with lots of corruption (Except for the laws they create) this group has also became more toxic then ever. That even made Redwhiteandpew leave (Sorry for mentioning him). I agree with why Redwhiteandpew left FS and all of Roblox RP. You have both, its unrealistic and Most of Roblox RP servers are Toxic and have unrealistic parts. Fedora and his Co-owner need to do something fast to make FS last longer, unless you want people to leave. All of the old people who formed Firestone in what is today left.

Is there any way to fix this pretty much? Remember nothing lasts, 3 years later you will see this group dead or almost coming to an end.

People are also starting to join Private RP servers. They are rapidly expanding and are almost up to the level of FS.

This is due to fear we have on if we do. We have to do everything from a black and white booklet and we can’t leave that booklet. If we do, we get either charged with False Arrest or someone finds some way to sue.

I wish Firestone could be more game play based instead of realism based. In my opinion, interfering with a public employee should be one of the highest offenses and simply robbing an ATM should be less than that. It is more damaging for the game if you interfere with public employees as it isn’t part of their RP to deal with criminals.

The word “Starting” doesn’t begin to describe the downfall of this state. The downfall has been going on for forever. I agree with you that this group is toxic and honestly, there’s no way to combat that cause there’s always one person who won’t like what’s going on and will take out his or her hate on the other people in this state.

It’s nice to see the founders do make attempts to curve and boost the amount of roleplay within the state but after a while, it becomes barely used, unused or boring. There are players in this state that actually do roleplay and create good scenarios for first responders, business owners, and civilians (to name one, CanineEnforcement), but not everyone can be like those people because they’re honestly just trying to have a good time, in THEIR opinion, which causes dislike.

The only fix to these problems we have is to just, push through.

We also desperately need a way for civilians to earn LEGAL currency. Legit, if you like to RP within the legal community or regulatory community than you get 0 benefit from your hard work in game. Fedora wants DOJ, Courts, DPS, DOS, and DOCM to be active but it is hard to find employees who want to do work for a department and not even be payed for it in game.

The reason why Private RP servers like Greenville or Pembroke are growing is because they make the hiring process easy. You have to do an application and a few trainings and thats it. Also moderators are always patrolling the RP server as well to make sure there is no FRP going on. Private RP servers pretty much have everything that FS has but 10x better. People are actually switching to these Private RP servers instead going for FS, Aigio or MF. Also Aigio is also dying.

IMO I think that is just what happens when you try and simulate real life in a game. Ppl gonna get mad at each other.

My friend even told me to join a private RP server, something like Pembroke or Greenville.

I’d say it’s starting to smooth out. It was definitely declining last year due to literally nothing being done and probably 2019 as well. “Declining” meaning it not being fun / being less fun for members who are already in the community, it doesn’t mean that the member count is actually dropping Founders reading this with a smug face. I would say the new development and attention on v2 is making it a little more interesting.

Might as well pump this into here as well: This new points RP system is literally ridiculous. Apparently they want to “encourage RP” as if every person who properly RPs will absolutely get a point: no. It’s literally a friend system. Nothing else, it is based purely on popularity, whether that is intended or not. I’ve also only seen probably 2 people in v2 with any reputation because it literally takes 6 hours to attain one point. And now, after we have requested it for probably the past 2 years, oh yay the Department of Transportation finally gets more than 10 cones – if enough of your friends have given you “points”. Literally merging departmental functionality with a dysfunctional points system doesn’t make any sense and we’ll see how many perks the popular in Firestone get while the primary issue with v2 is the lack for new players or new criminals to do something due to the limited possibility. Do you think these new players will ever get any points, especially if they turn criminal? No, because the legal community hates criminals, especially new ones. This points system helps no one except the few popular who get to benefit from it in the future. It’s shifting the issue once again away from developmental responsibility and into the hands of the community.

Check out his last videos. It says he permanently left FS for lots of reasons. 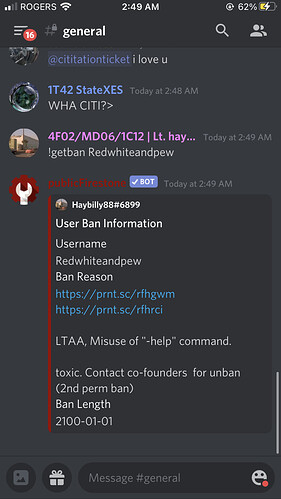 Again though FS has lots of corrupt LEO’s which Redwhiteandpew exposed. There was this one video where he tried to get 3 FSP calsigns and he requested it. Both there username and calsign. The FSP units later refused to give it to him after requests from Pew. Also by FS law, all LEO’s are Required to tell there calsign and username by any request.

Ok but did any of command get reports of it? As I am command myself not once did I get a report of it or even a tag in command chats or anything like that

That is kinda a unreasonable ban. I would say it was the LEO’s fult for being Toxic to Pew and they should be held responsible. Pew does make a point on FS LEO’s being toxic as fuck.

ok but him going up to every Leo for absolutely no fucking reason and saying “NAME AND BADGE” is ok?

That is what I call toxic af

That was literally 2 years ago. A lot of, although definitely not all, of his cases were definitiely not policy-compliant, but it was when LEOs were barely even taught laws.