Wierdo25 and Philip_Forth, A New Perspective

Motto: “Fuck the left wings and the right wings everyone knows the drumstick is the best part of the chicken”

I, wierdo25, alongside Philip_Forth are going for walks in the Firestone Gubernatorial Election for Governor and Lieutenant Governor respectively. This manifesto become made to tell you of the progress we want to make within Firestone, in addition to facts about ourselves. every subject matter will have its segment with the cutting-edge state of the subject, and the adjustments will implement if elected to the workplace.

Our main goal is to start working on setting up departments for v3. However, we all know v3 is probably not going to be released for another 3-4 months. Therefore, our main main goal is to actually get the gearing moving in the legal side. When Philip_Forth was criminal he got prosecuted on a monthly bases for the crimes he did. However, today criminals who commit crimes do not face any consequences for their actions. We don’t plan on bringing back 72 hours or ridiculous charges to lock criminals up which will cause them to leave the game (that would be stupid). What we plan on is keeping the 3 hour max jail time but worth with LEOs and DoJ to get more criminals prosecuted. We also want to get some more DCJ. Now we know that DCJ isn’t a free position we can give out like you can give out guns in America. However, we want to find people who are capable and then get them nominated. (We only have Skye and Ello who are working hard but they too are busy people irl)

One thing we plan on doing with congress is actually lowering the amount of seats in Congress. The reason for this is because of how easy it is for random to get into congress. (Like that whole Jefrafra alt becoming a Representative…) The fact anyone who has 10 friends and a few alt forum accounts can become a HoR is actually ridiculous.

Inside the recent history of Firestone, the amount of categorized information and records this is kept hidden from the general public has accelerated and improved. We believe the government must be extra obvious. Our purpose is to declassify and launch things that have been sitting within the archive and pose no chance if they had been to be launched. In our minds, humans are above the government, and the authorities should be greater transparency.

These days the state department has been left to rot. Our goal for this management is to restore the national department and install our foreign coverage. We believe that we should be responsible for maintaining the peace between all inside the Ro-nation community. If we ought to deliver peace through power, we shall be ready to do it. We consider all have rights, and that we need to protect them during all of the states.

The govt department has almost constantly been saved quiet and secretive. No extra. Our executive department can have a press division to tell citizens of the accomplishments and development of the department. allowing the chief of team of workers to steer this press division, advise the Governors, and paintings with the County extra, and no longer simply be someone to take notes at cupboard conferences. Giving our chief of workforce energy to work with the govt branch and is the general “Secretary” of the department.

Some of our plans for the govt branch:

We really don’t have plans on changing leaderships as of now. We believe that all departments heads are doing pretty okay at the moment. However, if we do get elected then we will have new standards for cabinets to follow and if they don’t meet those standards then they will get the boot.

I’m Philip_Forth and I approve this message

so im gonna be the first to bring this up.

your LT governor candidate has absolutely zero experience in legislature but is expected to lead the senate. can you explain how you see this as working efficiently

your LT governor candidate has absolutely zero experience in legislature but is expected to lead the senate. can you explain how you see this as working efficiently

You don’t need to have senate experience to be a lieutenant governor, it’s also not like anyone has not known of Philip before.

it’s also pretty easy to see how the senate runs from an external pov so.

I SUPPORT PHILIP_FORTH AND WIERDO25,

only here for philip, support 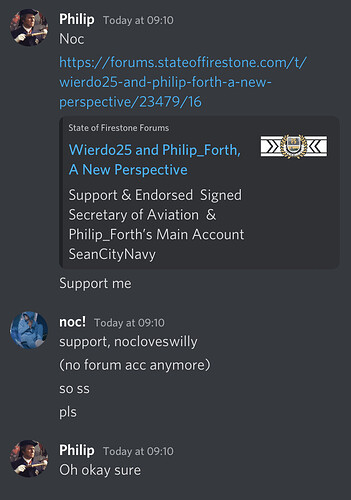 your mad toixic wierdo and you tried to run for senate or house i forgot which one just to ruin it. I dont want my governor that does those things. No Supporrt.