Good Evening, Firestone. Some of you know me as tonysstepbro, or my previous username Shadow_Pentatonix. I am a long-time State of Firestone member who has typically focused on the Law Enforcement side of Firestone. After serving within the County Government, I took a very long break from the legislative side of Firestone. During this time, I have gained fundamental knowledge on the specifics of the Firestone congress.

As an outsider to the Firestone Legislative Government, I believe I will exist to be an effective Senator as my priority would be the status of the State rather than my political career. I intend to propose pieces of legislation which benefit Citizens of Firestone positively in public and behind the scenes if elected.

I am announcing my candidacy for the 2023-1 Firestone Senate Elections.

Below you may find noteworthy positions I have obtained.

Thank you for considering me in your ballots.
My name is tonysstepbro, and I would be honored to have your vote.

Any questions / comments can be sent to my direct messages (hayden.#7133) for an expedited response however questions are encouraged on the forum as well.

candidate has full support from me!

what is your opinion on the issue of foreign nationals influencing our government?

Foreign nationals influencing our government could pose a huge threat to the security of the state. I will be proposing legislature that benefits Citizens of Firestone without the unnecessary influence of foreign nationals. If in my time as a Senator I discover such, I will ensure a common understanding of the threat with congress and work to find a unified strategy to address it. 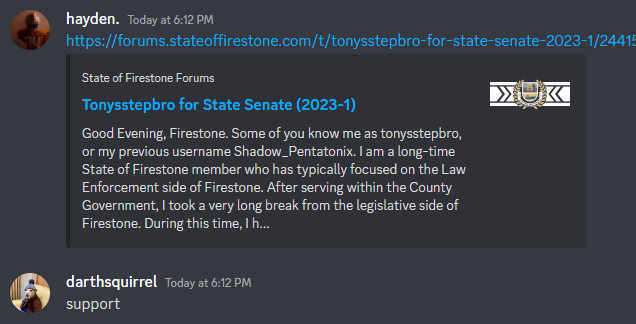 Support! It is evident that this man will benefit the citizens and not the EVIL ESTABLISHMENT!