Senategate: What the public weren't told about the Aigio incident

Hobo_Bear sought for and supported my expulsion for simply knowing about the Aigio incident (disregarding the fact I had reported this incident and co-operated with agents of the Criminal Investigation Service). Setting aside that it’s obvious that this expulsion was a plan to 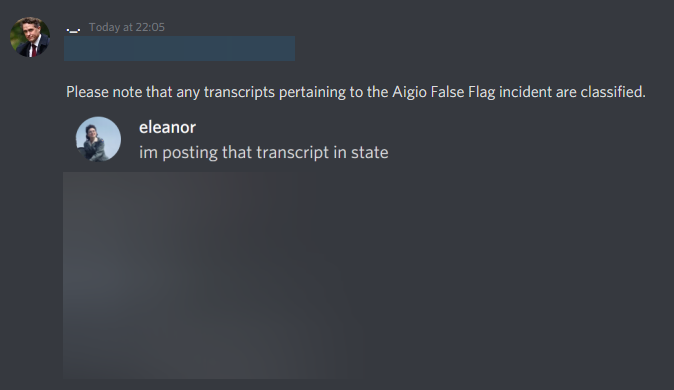 I was also instructed not to release this information. I see this as objectively wrong to selectively release the names of individuals in this matter. Hobo_Bear was involved, and the public weren’t told that, the Senate weren’t told that.

I am calling on Governor @DyingSym to release the full transcript without classification or redaction (except for where appropriate to defend state security). I am also calling on L_3ee and Hobo_Bear to submit their resignations immediately, and would naturally expect DiazEdmundo to do the same.

What I thought was very embarrassing at this session today is that the Senate had the balls to silence the County Executive when he had the floor. That is outrages and it should be stopped. I don’t know how many times I had to mention to my own chamber to not silence your fellow colleagues when they want to speak on the floor. You don’t motion to PQ ( skip to voting) when he is literally in the middle of speaking.

The Senate was a complete embarrassment today. Their true colors were shown today as well. Instead of representing the public, they abused their powers of the Firestone Senate for their own personal gain and revenge against Auto. It’s pathetic how four Senators were willing to expel Automationeer without any facts. They expelled her because they were pissed that their friends were barred. This connects all the dots to the story and I also call for the resignation of all the Senators that voted aye.

The County Executive is not a senate colleague, but I get what you mean.

We should introduce resolutions to amend the rules for our chambers so people can have time to talk etc. Could be a good idea and people cannot just skip straight to some things.

I was more disappointed by how senators removed spectators from the floor following the incident, and how they interrupted the County Executive amidst his talking.

I was also instructed not to release this information.

No, you were merely instructed to not post the transcript xx

With much love,
Wolf

No, you were merely instructed to not post the transcript xx

. Stop changing your words because it’s in the public eye.

With much love,
Auto

Saturdays are for Gamers!

What has happened in congress over these past weeks has been truly shameful. Congressional officials have used their powers to silence, remove or otherwise put down political opponents, other members of congress and citizens of this state.

I have been a person to always stand up for what is right, and I’ve held that point of view since joining this state 4 years ago. I fought against all of congress during the barring of EpicXboxdude, mainly against Senator Automationeer and this congress passed it without so much of a second thought (It is now being fought before the Supreme Court). This congress then went as far as to attempt to make this bar a permanent bar where the Firestone congress could be the only body to repeal it. This was vetoed by the Governor (extremely luckily) and I had the chance to speak before the House of Representatives about the matter, going so far as to change the chambers vote from a majority “aye” to a 0-4-2 vote. This is what happens when people are allowed to speak before a Chamber of Congress, opinions are given and opinions are taken.

What happened today by select senators and the entire chamber was an embarrassment to this state, to it’s people and to every individual in attendance. This chamber expelled a respected, senior and well versed senator for no reasons other than to politically assassinate them. I was given the floor, and my time on the floor was respected until I called out the senate on their actions before the citizens to which I was silenced by Senator DiazEdmundo. Senator DiazEdmundo is no stranger to political silencing, going so far as to report the Deputy Mayor of the District of Prominence when a joke was made hinting at muting this senator in the Prominence Discord. My office received a report about corruption, abuse of power and ineptitude against the Deputy Mayor for no purpose other than attempted political assassination. For someone to be so against silencing politicians, ensuring that discourse can continue, DiazEdmundo sure held double standards before the Senate today.

And for you Senator danny, you state

yet you proceeded to vote “aye” on the motion to PQ whilst I still held the floor. You are no different from the rest of the Senate gathered here today who moved to politically silence Senator Automationeer, and myself.

Funny what hypocrites we have in the Senate. They say Auto should’ve waited till DOJ conduct’s their investigation, yet, the Senate expelled Auto before anything was concluded as well? What a disgrace.

shame it didn’t pick up you threatening the governor if he declassifies the transcript!!

why is congress like this. all you guys gotta do is pass laws and shit for a lego game