I. Introduction
II. About me
III. My experiences
IV. My plans
V. Conclusion statement

Hello, fellow citizens of Firestone! My name is sithmaster921 and I intend on running for Stapleton County Council in order to have an opportunity to improve the county and serve the citizens to the best of my ability.

We have a democratic system, in which any citizen who can rally the support of their fellow citizens can be elected to any office from a City Councillor to the office of Governor. I hope to have your support and your vote for this election!

Right now, I’ve been actively participating in Firestone for roughly half a year now. While this amount of experience certainly does not make me a veteran in this State, it has taught me how the government runs on the local, county, and state-wide level. I’m currently a practicing bar-certified attorney, and though I haven’t had much experience as an attorney, I would like to say that it at least shows I’m proficient in understanding our legislation and legal system, which I believe would be vital to be elected to this office.

You’ve heard enough about what I’ve done in Firestone, what about me personally? I was raised strongly to have respect for peers and superiors embedded into the foundation of my person. I also would say that I have a particularly strong work ethic and I have much determination—while I’m not proud of it, I failed the bar around 4 times before I passed. I make sure especially to be sympathetic and kind, it certainly goes along with my respect to others.

Some of you may be hesitant to support me because of my lack of county experience or not having been in Firestone for particularly wrong. On the other hand, I embrace this partially as I believe I can bring new faces and novel ideas to the County government. I hope to do everything possible to improve the efficiency of the County government and to improve the livelihood of our citizens.

If you have any questions at all, shoot me a DM at normal saline#4116 or just ask me any question in this post.

Thank you for your time, and I hope to have your vote!

I have confidence in this candidate to not be a complete idiot in the county government. Support

Since @Hmmm_Poul supports, I will support this candidate. 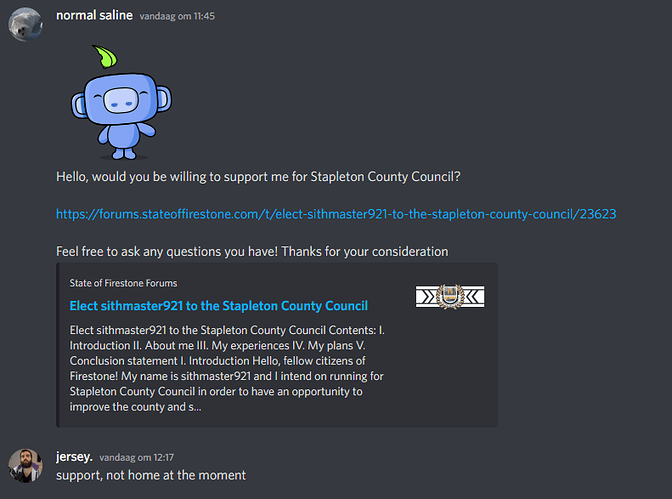 honestly county government kinda useless and its wasting your potential mi amigo, however i have no doubts about your ability to both legislate and litigate

Support, you are definitely the type of person the County Council needs! 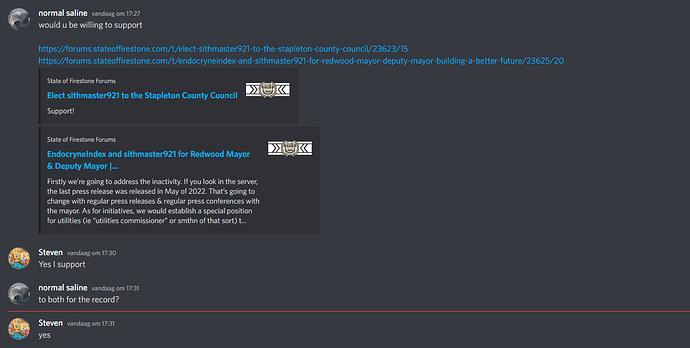 support! very good and overqualified candidate, is experienced in law very much.