I. INTRODUCTION TO THE CANDIDATE, I, DR_KAPUT:

Hello voters, residents of Prominence, and citizens of Firestone. I am Dr_Kaput, a citizen such as yourselves, seeking candidacy in the Prominence District Council. I joined Firestone in late March, quite notably a few days prior to my birthday. Like most people, I started out on the wrong foot with an arrest. Without anyone to explain, I continued down this criminal path. A kind citizen assisted me in going legal after a failed expungement attempt, and I listened to their advice. It led me to getting employed in a few departments, and going down the path to further my Firestone career. However, I shall refrain from boring you too much about my history; if you need to make inquiries about my early days in Firestone, you can direct message me on Discord (my information is at the bottom of this post as well as here; Dr_Kaput#7865).

As some of you may have noticed, I do not have any legislative experience within the State of Firestone, thus, I wish to begin my journey into Firestone politics in the District of Prominence, one of my favorite locations since I joined Firestone.

If elected, I wish to uphold my duties (expected of me), as well as the following:

If you have made it to the end of my speech, I thank you for taking the time out of your day to read it! I hope you consider me for the Prominence District Council, and even if you do not, I still thank you for reading and hope you consider at least another candidate for this election. If you want me to further elaborate on anything in this speech, please comment with your question or direct message me on Discord (Dr_Kaput#7865). I wish luck to the other candidates and have a wonderful day.

Available 6 PM CST - 11 PM CST Monday through Friday (This is when I will respond to any questions that may arise and please keep in mind that my schedule sometimes changes.)

P.S. Again, this is my first speech for a public office, I apologize for anything that may seem out of place or such. 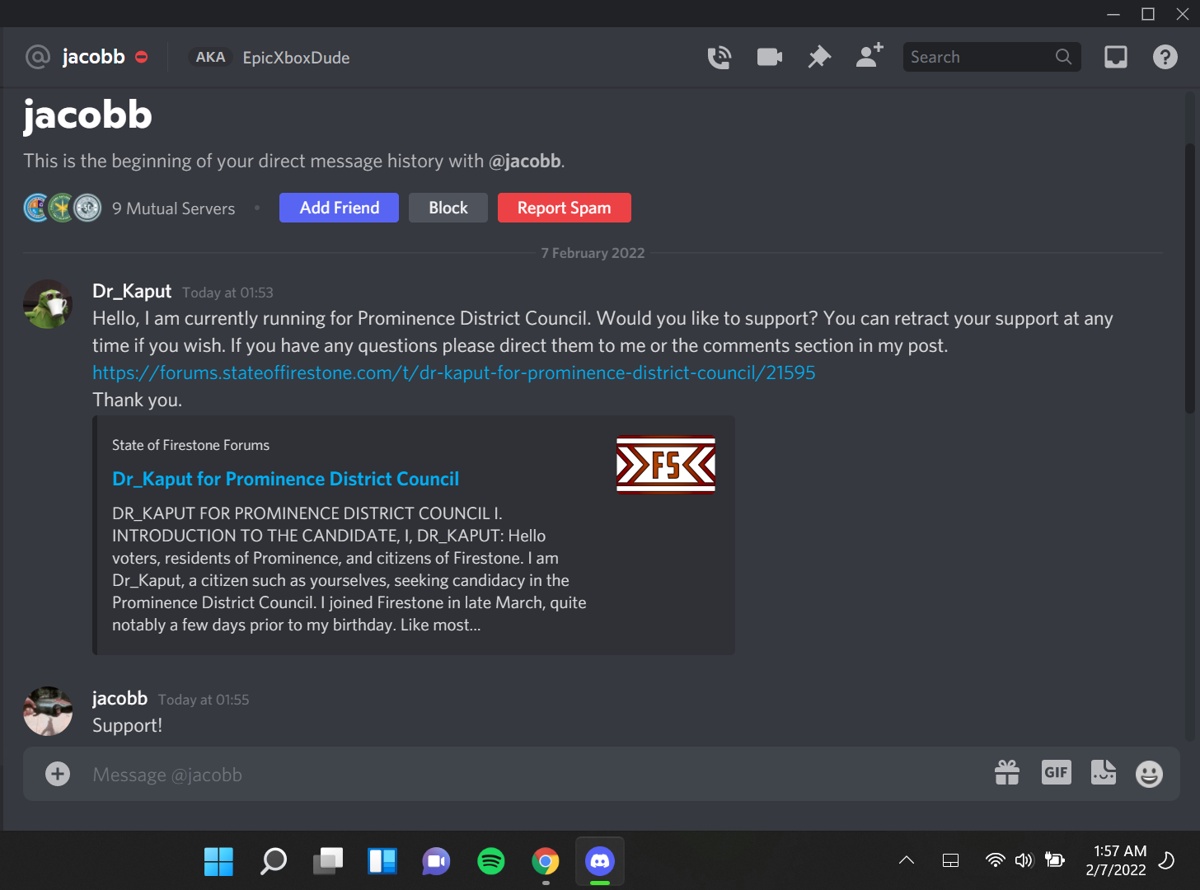 Thus far i’ve had some experiences with you that (to say the least) question my desire to support you.

After your defense of veryunconstitutional (name says it all) I’m questioning whether you’ll be here for the good or for the worse.

On the grounds of being safe, I won’t be supporting.

If you are elected and you prove yourself worthy, I’ll be happy to support in future elections.

I understand completely; I hope I can rebuild trust with those that are wary of supporting, but nevertheless, thank you for your feedback. What kind of events?

Propose legislations that have been supported by local sponsors

Thank you for your feedback & questions, I appreciate them!