BEFORE I START THIS I WOULD LIKE TO STATE THE FOLLOWING:

I AM NOT TARGETING THE INDIVIDUAL WHO MADE THE SAID STATEMENTS DURING THE MENTIONED EVENT, I‘M JUST GIVING MY POINT OF VIEW ON IT AND I COMPLETELY DISCOURAGE ANYONE FROM ATTACKING THIS INDIVIDUAL AS THEY HAVE THE RIGHT TO THEIR OWN OPINION.

So, on June 4, 2020 at 3:16PM MST there was a House Session where they discussed and voted on a Amendment that would make the Firestone Department of Commerce a voluntary department…it failed 0-7-0 with the main reason being “Commerce is like DPS”.

Which brings up the question, do y’all think Commerce is like DPS, Because personally as a Commerce Employee, I don’t.

For one most of Commerce is PR, and no I’m not shitting on my division (love inspections <3), but the moment a business leaves inspections with a license it’s up to PR to make sure that a business gets known within the state and they have customers/clients coming through their door.

Inspections job is to make sure a business is up to check on everything that is required to make sure they can run successfully without any problems…and that’s it, Inspections cannot physically take away licenses unless it’s during the inspections process and they end up failing in one of the categories under the General Business Policies, but other than that the only people who can take away licenses are COTB, Deputy Secretary & Secretary.

Second thing, there was a statement that stated that we were not in need of employees because we only accepted two at the time…the whole point of hiring is to fill spaces that need to be filled, no department is going to have infinite spot and every department in Firestone that I can think of only hires when they need more employees which so does Commerce.

•Investigation: Carry out an inquiry to discover facts of (allegations, incidents, etc.) to uncover the truth.

There’s the end of that little rant of mine and with that I want to know what you all think about all of this, leave a question or maybe you have a different view on the matter, in which case I would love to hear!

Any department without a team should be automatically considered voluntary imo. Why should a job slot be taken by something that has no v2/v3 responsibility.

i think 6/7 the seven votes casted were those who know nothing about businesses, economy etc. not to mention they didn’t even have a debate session because they motioned to PQ, I’m tired of seeing posts like this constantly about the congress not listening to citizens.

I honestly would’ve loved to have provided a statement regarding it becoming voluntary as someone who is currently in Commerce but sadly we could not.

I was at the session and was surprised that they all voted nay. DOCM doesn’t have many members due to the fact its secondary, when it should be voluntary. Like @Automationeer said, any department without a team shouldn’t even be considered secondary due to the fact they got nothin to do

Check Discord DMs, rather not say here in public.

An Amendment to the "Employment Positions Act of 2019" State Legislature

BE IT ENACTED BY THE STATE OF FIRESTONE LEGISLATURE THAT PREAMBLE: Currently these departments listed below have no team within the county and therefore they shouldn’t be considered a secondary department. These departments would go back to secondary if a team is made for them in V3 or they have more of a role in the county. The reasoning for this is because it takes up positions for those wanting to serve in other secondary and primary departments but have no official team to operate in other …

2nd times a charm. This is for Commerce and DOBW. I do think more should be added who don’t have a team.

Commerce and dps are not comparable lol 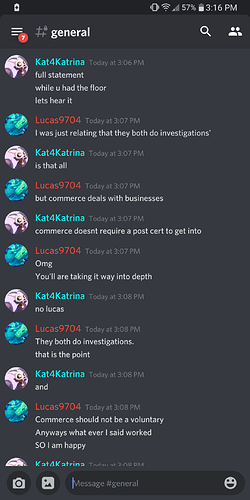 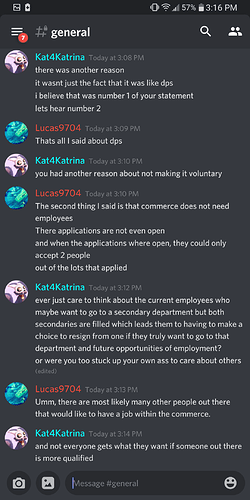 commerce should be voluntary lol

there is literally no reason to not make commerce voluntry

idk how some people even got elected in when they don’t even listen to the people.

Being the former commerce CI, it is nothing like dps. They in no way do investigations on buisnesses the way DPS investigates people based on submissions, in the time I was CI not one buisnesses was/needed to be investigated. It fully deserves to be a voluntary position. Those who voted no have zero experience in commerce or buisness or economy.

THIS. Congress, and frankly, all elections, are a fuckin popularity poll.