this means less overall seats but more individual seats (within the chamber), which gives rise to more leadership and more realistic and populated legislature sessions

firestone is the last state to be bicameral and there’s good reason for that. and before anyone says ‘fed’ we won’t know for sure unless we try thx

only have one chamber?

of course if implemented, the technicalities like term lengths and seat numbers would be reviewed in detail — similarly there would be a total re-election with every seat up for grabs

should be fixed i think 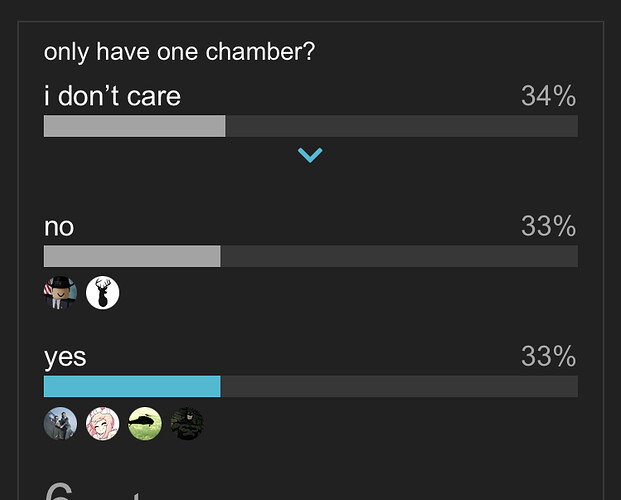 that dude has the same pfp as me

before i even comment on it, feds gonna say fuck no

Making a unicameral congress has benefits and downsides. No place for lesser experienced politicians trying to get involved, however it greatly increases the efficacy of congress. If this was to happen, i’d say you have to make municipal governments for involved and give younger politicians experience with legislating before you even consider this.

I’m watching a documentary, I’m sorry if this is fucking terrible.

anyways that’s my opinion, as of now its a no but once municipalities are fixed, id be down for some progressiveness.

No place for lesser experienced politicians

there already isn’t lol, most people in the sitting chambers are all buddies and vote in accord

for them to do (and that’s still the case)

anyways: its still a no until municipalities are fixed

no!!! It makes Firestone more unique
some things just don’t have to be changed

it gives more people the opportunity to serve in this state’s legislature, and I personally enjoy being a representative. further, it also keeps both chambers in check from passing bad legislation and i do believe thats one of the good sides of this bicaeral legislature. however, “more realistic and populated legislature sessions” i can agree with and i could see how this would be a lot more fun in a way. nonetheless, i enjoy a bicameral legislature more than a unicameral–considering firestone is the only ro-state to have a house and a senate, which makes us more unique!

yes although for most of the things i do in the municipal government is amend the charter or create council resolutions because us inferior governments have nothing to do!

@mallyvibes I respect your statement. However, I had to cover your profile picture while reading because I kept laughing seeing your adorable shiny face.

hahahah i love this comment. i put too much oil on before taking the picture, but thanks for calling my face adorable

Until we can get at least one side of Congress to be filled with highly active and competent individuals, I would rather keep the bicameral system. This way it requires two sides to agree hopefully reducing the chances of something dumb passing.

I support ngl, it’d be sick as fuck

what kind of oil? need this

If it was bicameral, it would force elections to have more competition since everyone’s on the same raft. It would make it much harder for incompetent people to get in.

congress is inept, abolish it

did you have an emergency lobotomy as you wrote this shit take?