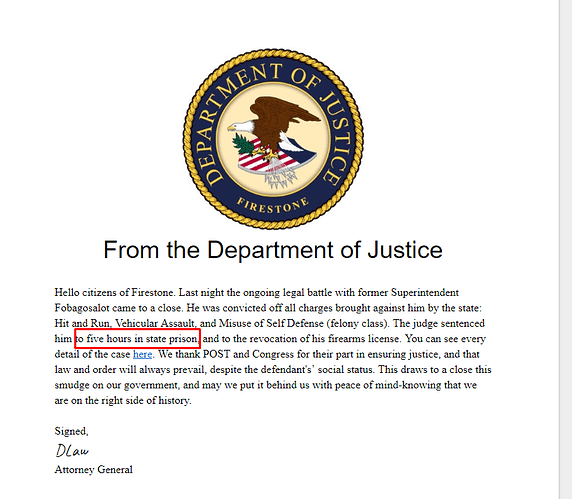 who are you to completely ruin someones time in this group

why would anyone actually sit there in jail for 5 hours

do the crime do the time

Timothy got 10 hours for less charges…

Yeah, the courts are a cuck sometimes.

When I was a judge, I gave NinjaKiller 12 hours for murder.
Shouldve gave her more.

Realistically though, this isnt much time. Serve an hour a day = Sentence done in 12 days.

I’m sorry but that’s such a retarded statement to say in a video game lmao, people need to realize this is a video game in which its trying to grow its community. If you remove the fun of people doing crime or such by literally making them sit for HOURS and even sometimes DAYS is literally dumb. You are driving people out of the state slowly. I’d say 1 hour in jail should be a MAX. It’s either that or make jail times actually pass by real time instead of actually sitting in-game doing nothing.

Sitting for 5 hours or such would be tolerated if DOC were actually functioning right, instead you rarely see DOC do any shit in the state. Furthermore there is no way to break and literally you sit in a small room doing nothing but actually waiting until it passes by. It’s either you make DOC actually do things in JAIL in which the user can still interact instead of sitting or just remove those harsh punishments on people.

Ya that’s too much time, It’s a game unless some people are forgetting…Games are mean to enjoy and have fun. Giving someone like fob 5 hours in jail with how much he has done for the state is just retarted. Also, in FS you lose connection a LOT and each time your jail time restarts…Don’t even start with people who have served 42+ hours. Makes no sense at all. Max time should be 40 minutes - 1.5 hours. And hydra is ok lol everyone thinks every gang in FS is dumb because no one knows how hard it is to run a nice criminal group, smh.

The court system has been known as a joke with its harsh and unusual punishments in which I like how I don’t see no one taking actual actions upon that.

Also a daily reminder, a game literally has no content for CITIZENS themselves, now imagine being 0% content being a prisoner inside a 4x4 block or something doing nothing but sitting there cause DOC aren’t active at all

because i gave out a speeding ticket that was too expensive

Lets be honest, who hasnt done crime in v2?

What makes the difference between you staying in a jail cell for a shit load of time and not getting any time at all is if you get caught or not.

Also, if your a government official, your x100 more likely to get caught and/or punished for shit. Even the little things.
Such as, when I was a judge, I got sued for commenting SUPPORT on someones forum thread.

I ended up commenting support on everyones thread…

The jail system is weird here. Personally I feel a few improvements could be made: firstly, raise the max in-game Arrest time to 30 minutes. This better punished those Hydra cucks who just do continuous mass shootings that ruin the game for people. Two, give people more to do. And I don’t mean just in prison, but general activities so there is more to do than a continuous game of cops and robbers. Lastly, I could see the maximum jail time going down to like 15 hours regarding the Courts. They’ve become more lenient recently if that’s a good thing or not. But ultimately there does need to be more than say the Mayflower way of one hour sentences. Some people are just so fucking annoying with the way they do crime, take NinjaKiller as an example that @anon89270917 brought up. Continuous, random murders and shooting, and all she does is be a pain in the ass. I love criminals like Furry who aren’t just massive ass hats. Getting continuously murdered by the same person is an annoying aspect of our game, and should get a punishment that stops them from doing it for a nice amount of time. And also, five hours isn’t that much. Envelope finally fixed the save data shit so crashing doesn’t reset the time anymore. So you do one hour a day (what most active players spend usually), and you’re out pretty quick.

So if you spend an hour straight shooting up CD, jail, shoot, jail. Then go through a two hour long trial you get one hour?

That’s moronic, if you ruin gameplay for others constantly you deserve more than 60 minutes in prison.

i think the times should depend on your past aswell