There was a incident that took in which a very special Associate Director claimed that there was a escort and decided to kill a innocent unarmed civilian. In reality, they would check if the person is any harm before shooting, although this user took it upon himself to just shoot instantly without no warning or anything.

Was normally driving in the Great County of Stapleton, and while I was driving I found the limo just sitting there, I parked in the FSP where it was parked also as it was empty and there was no “escort”/protection even near the limo. I see Associate Director Kale566 get in the limo and drive. I then proceeded to leave and drive by the law as I saw the limo speeding. And while I was at the Arborfield Hospital. The limo decided to take a illegal uturn on the same road and forcefully making me hit the car. I then stopped because if I ran it would cause it to be hit and run. And while I stopped I saw the officer starting randomly to shoot at me and I didn’t move or hesitate as it will also still count as hit and run. The officer never checked if I had weapons or told me any instructions. He instantly went on attack mode for no reason.

Those are full screenshot evidence showing the actions being taken place.

(Him refering it to a escort)

Now Firestone doesn’t actually define what a Escort is, so therefore let’s go by the literal definition provided:

Now a user alone doesn’t seem like a escort to me, as he was the only person there. Also in a standpoint given, he needs to again, check if the person is armed before actually using lethal force. 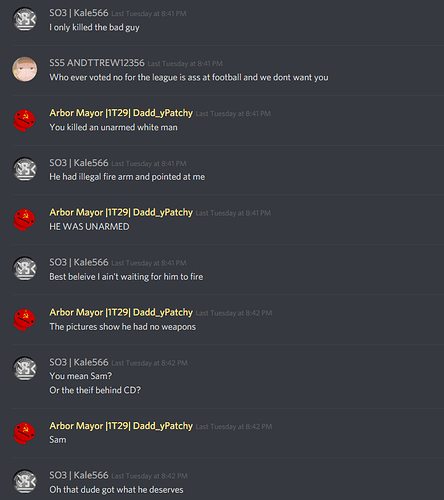 As you can see from the screenshots from the start, I didn’t not have any weapons at all. Never did he even ask me to get out of the car or anything. He just started using lethal force instantly.

I proposed my case to a local attorney of mine and the Department of Justice stated they denied the case due to there being no evidence of him killing me even tho he confessed multiple times??

hand over the tl;tr right now

Got shot for no reason, was unarmed. ended up defending himself by stating its a escort when there was no protection at all.

tbh no one cares who does crime if they are a high rank
that’s the truth due to how many people were on fobs side even if there is valid evidence
sucks to be you but that’s really how peoples minds are.
they take a lot against you for speaking out for being a snitch
been harassed many times for snitching on people doing crimes, stealing fs tech, and more.

I impeached fob… did i not?

me and nico literally convicted fob wtf are u on

no no talking about fsp
i’ll put it in terms

Seems to me that kale did a huge mistake by shooting a vehicle for the wrong reasons. You don’t shoot someone for following a car.

The DOJ won’t prosecute because the confession wasn’t under miranda. The Courts acquitted in a case similar to this in which the defendant confessed in public, but was not under miranda or oath. Best we could do is a misdemeanor misuse. Get proof of death and come back to us.

@DannyboyJurist Even if no proof of death, theres proof of him shooting the blue vehicle with no reason and that itself is a crime.

What crime? Law enforcement are exempt from open carry. And attempted murder would be extremely hard to prove even with that invalid confession. Unlawful discharge or anything similar is not a crime. Once again, misdemeanor misuse, which isn’t wasted on criminals and won’t be wasted here either. And for the record, bullets can’t penetrate cars due to the way our 10/10 vehicles are.

Also, if you had a real case then you would have just explained everything to everyone including the person your against.

None of your points are legit valid.

If you really wanted to start something against Kale, you should not just post it in the middle of where everyone can see it and explain all your points…

It’s a way to show the people the facts about useless violance since I can’t bring my case to court.

Also, if you had a real case then you would have just explained everything to everyone including the person your against.

uhh well the second thing u said is unrelated… it doesnt really matter weather or not have evidence.

What the fuck do you mean by “the second thing”?

since i would assume u knew u didnt have a case my points dont really apply here but still i wouldnt just explain yourself to everyone in a post.

sounds dumb that apparently you can’t charge someone for shooting their weapon for a bad reason. @DannyboyJurist

with this logic a cop can shoot at a car for no reason and get away with it.

So basically I should just charge him with something that doesn’t exist? You’re a genius, why do I even need written legal text saying something, I should just do it! I’ve been an idiot all these years!