Greetings everyone, my name is DyingSym, and I will officially be running for re-election in Redwood, alongside Deputy Mayor AlexTheAviatorRBLX.

We have a plethora of experiences in the State of Firestone, which can be found below:

When we ran for the positions last term, our main goal was to further establish transparency within the City of Redwood government & the People of Redwood. During this term, we hosted a total of four (4) open offices. These open offices were there to get the public’s opinion, suggestions, or even to drop by and say hello.

As Mayor, I have signed multiple bills into law, some of which boosted transparency. For starters, the Mayor of Redwood is now required to release a “Mayoral Address” two times during their term. This address recaps what has happened so far, their future plans, and anything else they would like to bring up. Both of which can be found here: Mayoral Address 1 and Mayoral Address 2

We have also re-organized the entire trello board system; most notably the records board that details every single record in the City of Redwood. The records board can be found here

From day one, until the end of the term, I have strived for public opinions. We released a public approval poll during this term, and it helped tremendously in terms of where Redwood is at.

The City Clerk also released statistics, which can be found here

We plan on to continue where we left off, ensuring that transparency is kept, and further evaluating Redwood to ensure the best for Redwood.

We will continue to host open offices, and ensure the public has a say in it. Each day, we look for new ways to better Redwood; whether that be a simple update, or even a new bill.

We currently plan to raise the seat limit to a total of seven (7) for Council, as we truly believe that this is in fact a starting point for many, and a lot of people have expressed their interest in running lately.

Thank you so much for your support. If you have any questions, don’t hesitate to contact one of us at: 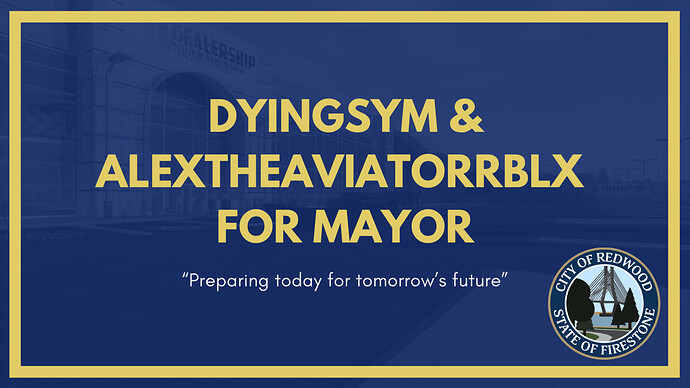 As Mayor, I have signed multiple bills into law, some of which I didn’t steal from Skeletron19YT.