Opinion's on the recent resignation of Senator DiazEdmundo

Without Bias, do you believe Senator DiazEdmundo’s resignation should have been counted?

Do you believe that his resignation was counted because of a bias motive?

This topic was brought to u by raid shadow legends btw

No, it wasn’t a biased move due to the fact he quite literally did not resign.

he intended on retracting, he did not retract.

Listen, there’s current senators who’ve committed felonies and literally jumped on desks so idk if that really plays a part

In my honest opinion, it doesn’t seem like people are fair to Senator DiazEdmundo, especially his fellow Senators. There has been (a) petition(s) for him to resign and I believe his image has been manipulated as a result of this.

Going back to the topic, in my general opinion, yes I do believe that his resignation was due to dislike by his higher ups. The Lieutenant Governor should have notified Senator DiazEdmundo (regardless if it is an obligation) that intent to retract and retraction are two different things, especially given the circumstances to which Senator DiazEdmundo initially placed his resignation.

it was racially motivated. give diaz his seat back

Perhaps Mr Edmundo should have stated in the “Intent to Retract” notice that he was not intending to, in fact that he was retracting his resignation. If the former Senator hadn’t messed around by posting a resignation, it wouldn’t have happened, it’s his own fault and he should have thought of that

that intent to retract and retraction are two different things, especially given the circumstances to which Senator DiazEdmundo initially placed his resignation.

If a Senator doesn’t know the difference, why can we trust him to write legislation that is supposed to be readible, make sense and actually be enforceable?

it was a simple case of one wrong word. The intention was clear and if the intention is enough to imprison criminals, it is enough for him to withdraw his resignation.

Legally, his resignation was delivered TO THEM saying he is resigning.

(no disrespect meant) but 90% of the people taking this poll are legally inept when it comes to reisgnation.

The intention was clear

intention is enough to imprison criminals

it isnt. Beyond a reasonable doubt.

Yes but this is Roblox and when I simple mistake in a word is made, it is honestly a garbage move to do. A much more simple way to avoid anything was to ensure he meant to resign, two seconds and this all would be prevented.

Yes but this is Roblox and when I simple mistake in a word is made, it is honestly a garbage move to do.

Yeah so is half the shit we do as a whole in this state. That’s how the cookie crumbles.

it was a simple case of one wrong word.

No. it was not a “simple case of wrong words”, it was an attention-seeking ploy. 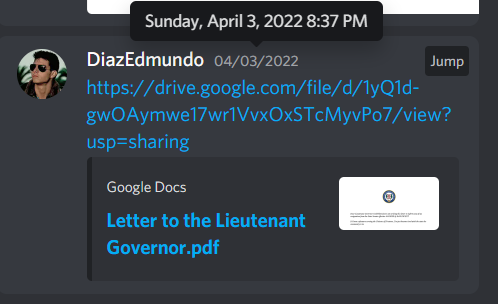 realizes nobody said anything in general except for a handful, submits “intent to retract” the resignation 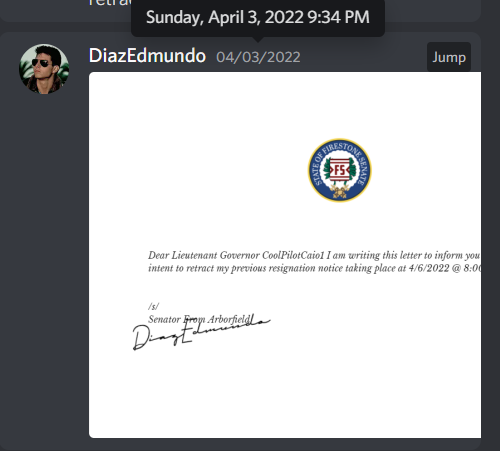 (keep in mind the resignation was submitted & the intention to retract was all in under an hour.)

Nobody lost anything except for him wanting to receive attention from it.

The Lt Governor was not aware of the resignation’s unlawfulness. The resignation had slipped everyone’s mind.

As superman said, this is a lesson to not be a dumbass with resignations.

Didn’t you do the same thing on the same day?

I mean it’s pretty clear that the reason it was looked at real quick was due to someone who doesn’t like him cough Auto cough bringing it to Cool’s attention.
However, legally he did in fact resign whether you like it or not. The fact that his resignation was followed is not based on bias, as it’s simply a matter of fact that he did resign.
If you compare it to the joke resignation thing Auto did for April 1st you can see a clear difference between how Auto (actually) retracted her joke resignation and how Diaz attempted to do it.