okay so, since congresspeople are quite literally blind to see what the people want, let’s put this into perspective. the whole legal community especially law enforcement officers are literally targeted by this bill. now, if i as a law enforcement officer show up to an active shooter scene NEAR a business and I see a person with their gun out inside a business, that’s literally putting me in a place where I either wait to see if they’re an actual business employee or if i wait i end up getting blasted which let’s face it, is fucked. pulling out a weapon normally takes barely 2 seconds ad those seconds won’t make a difference. congress people are designed to do what the PEOPLE want not what they want or what they think is good for the people, let us voice our opinions instead of just going out and voting aye.

if you congresspeople want to argue here, go ahead just know you’re not doing the right choice 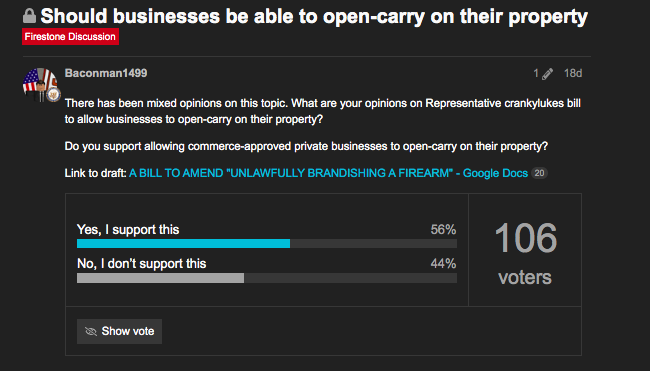 let us voice our opinions instead of just going out and voting aye.

Dude they do NOT suck him off

Can you do my FTO in 2 days

Identifying who the “good” and “bad” guys are isn’t always easy, particularly when you need to act quickly to neutralise an active threat.

It’s my opinion that being able to open-carry on business property hinders the ability for a law enforcement officer to act swiftly upon arrival to (for example) an active shooter scene. It’s true that the business staff are likely to be wearing their affiliated uniform, however, that cannot always be relied upon as impersonation can and does occur.

The only benefit I see is that it will enable business staff to make an attempt to neutralise a threat themselves, although, it isn’t their sworn duty to do so and puts them in further danger at the same time.

I have done this on a couple of occasions when I’ve arrived at a scene where a criminal and a citizen with a licensed firearm are amidst a shootout - simply because I couldn’t identify who was the threat and who wasn’t at the time, so I neutralised both parties.

another reminder, the FFC probably won’t be giving this exemption to food places and those that are similar. i can only imagine that the number of businesses that receive this exemption will be very low… so do not fear

what danhoo said, even if the amount is low it’ll still be a eanger

okay so, since congresspeople are quite literally blind to see what the people want, let’s put this into perspective. 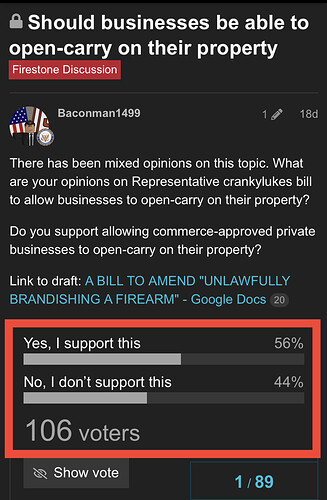 I mean majority of the people wanted this so I can’t really blame Congress. However, @DannyboyJurist said this so in the long run it’s not that bad for LEOs. 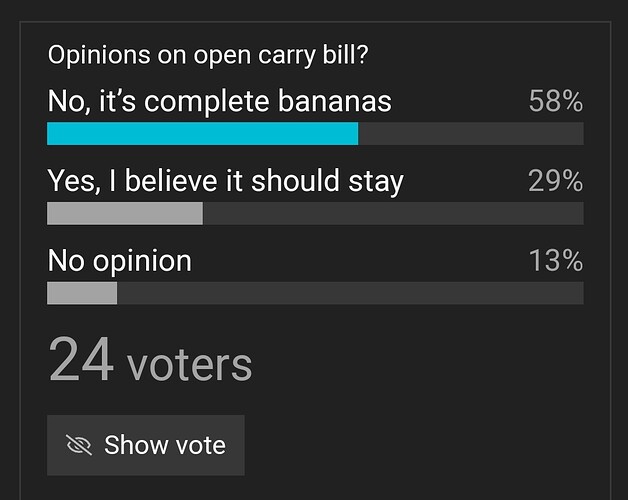 by 18 days…? want me to make a poll about every current legislation?

i mean logically any sensible person trying to prove a point via usage of statistics would use up to date statistics UNLESS they were trying to hide something, wouldn’t you agree?

want me to make a poll about every current legislation?

If hardly anyone is gonna get approval for it then is there even much point in it?

following a (truly bootiful) veto, the amendment has been sent back to congress (wahoo!)