Hello, my name is OliverSteph. I’ve been in Firestone since ~Early 2019, through my time here, I’ve had both positive and negative experiences (Like everyone). What I’ve learned though, is that my favorite form of government here is the lower levels, the underappreciated positions. For this reason, I am proud to announce that I am running for my second term in the Prominence District Charter.

Through the roughly two years I have bene here, I have amassed a large amount of experience, you may learn about this on my trello resume: HERE

The bills I have written (and had passed) in my single term as District Councilman may be found in the list below:

Although some of my plans are fairly general, I do hope to create real change once again within the District. I hope to have your support and want you to know that my DMs are always open if you need to contact me (Beans#9081), thank you for taking the time to read this, please know all and any feedback would be much appreciated!

Support and endorsed (AND HES RLLY BAD AT FUSION FOOTBALL)

Wise words of support from LtComms 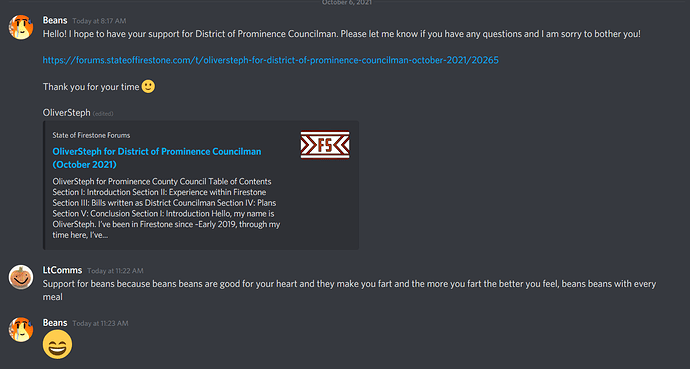