Well, in firestone I’m pretty sure it’s without a doubt easy to say that it’s extremely hard for criminals to make money. The only current ways are
A. Robbing banks/ Atms
B. Killing people and taking their money
Now, with these 2 ways, it’s extremely hard for criminals to actually make money. There’s about a 90% chance you’ll get caught when doing either of these things so why not implement some new things to overall give them better chances.

•Give them their own hideout where LEO’s cannot enter and look around unless a BOLO or wanted suspect goes in there. Maybe this can be located in Hillview.

•In that hideout, there could be some different ways of making money. Make there’s a person you could go up to and talk to who will hire you to kill someone for X amount of money (maybe 500-1000?). This wouldn’t be abused though since after killing them once, the hit would be terminated and killing them would no longer give you a reward.

•In the hideout, make another person you could go up to and sell them stuff. For example if you steal a car, you could sell it to them for 10-25% of the original price. If you have guns you no longer need you can sell it to them as well,

•Make a person you can buy illegal crates from and smuggle them (Continuing one of shark fish’s ideas here) of shipments of fed candies or illegal fruit. These crates can be purchased from an illegal dealer and then be sold for 1.5x tthe price later at another location. These could come in different sizes ranging from small to large. The smallest one could start off as 1000 Dollars and upon selling it, you receive 1500 dollars. The medium size could be 3000 FSD and upon selling it you’d make 4500, The last would cost 6000 and upon selling it you’d make 9000. This wouldn’t be easy though since once someone purchases a crate, an automatic BOLO would be set featuring their name and their car. A police call would also come in from a caller named “Snitch” and it would be reporting the player and their vehicle for smuggling. It’d be a fun concept for both LEO and criminals.

I know V3 is in full throttle but maybe you can implement these ideas in to V3 if you don’t want to do them for V2, developers.

Thank you for reading this!

Support, hillview needs stuff. (This is from an RP POV and not supporting crime)

SUPPORT! I currently can’t stand playing V2 and committing crimes, I literally sit at CD or slapping bear when hes on IO

If firestone developers implement this stuff then I’ll go criminal.

Cause then it’d actually be fun.

Make something illegal to sell Suggestions

Ok ok, before y’all bash me with the “oh drugs are against tos” and all that stuff, hear me out on this. Criminals don’t got many ways of obtaining money that are discrete. All you got is either sitting around for some cash or robbing a bank/kill people for money which are loud, expensive and pretty high risk. However I think an illegal substance you could sell would solve this. It doesn’t have to be some obscure reference to some irl illegal drug, it could honestly be an illegal form of bloxy…

A Petition for fairness and equality (By JasonBourneAxis) Firestone Discussion

A Petition for fairness and equality Written by JasonBourneAxis, A petition to the Firestone State Government and Congress Too long to read? Here’s a summary Three issues criminals and citizens have that needs to be listened and fixed. # Excessive Prison time The prison time here is outragerous, we’re criminals, we mean something in the state, sentencing us to antyhing above 24 hours is excessive and shouldn’t be allowed. You’re trying to imprison criminals who add a new roleplay aspect t…

As well all know that currently the only things the civilians are expected to do is to just drive around and not break any laws. However, when I play as a civilian myself, I find it extremely boring and torturing to just get online, spawn my vehicle, and just drive around in the county hoping to not get pulled over. Therefore, my suggestion to the developers will be to add some side jobs, like a cashier, cook, etc. in the county itself. Along with that, we can make it so that the civilians earn…

Support! It would be super cool if there was an organized crime group created by the founders, just like any other department, which would give members massive benefits in game. This would work as everyone within the crime group would be required to do some sort of training and learn better ways to execute crimes. It would also allow for the criminal community to connect and devise elaborate plots. It puts hard working criminals to work and makes it where criminals would rather not be toxic and…

There have been multiple forum post created talking about this same topic in the past and had a few positive effects like drop in illegal gun price.

I really don’t think this should be an idea for v2. Anything that gets added to v2 basically dies out in 1-2 weeks. When boats got added, for like 1 week everyone was rushing to docks and now I barely see people near docks but I do see a few. I feel like this would take FOREVER to create and once its created the update will also die and get boring.

tl;dr I think its better to not update v2 so they can focus on v3 which already seems like its taking forever.

Since you said v3 should have this, I support.

from a LEO POV,
Major support. we want more types of RP too. m a j o r support.

– MPO and SWAT and MD boi

I’ve stressed it considerably and i’ll keep stressing it: Criminals are just as necessary as LEO’s for Firestone and yet they get tossed to the side and seemingly neglected. Lower gun prices was a huge step but more is needed.

So yes I whole heartedly agree with this suggestion. Gives criminals more to do and possibly creates more roleplay opportunities in general. The other day I got a taste of what TRUE FS roleplay should be like, I thank Karis for opening up that opportunity for me and others and I must say it was a very nice change in pace compared to usual V2. So yes support.

Ngl that laundry idea is a good idea, seriously lol.

Or even so you can work at inspectors or fergies, or be able to wash cars for people at cd? ¯_(ツ)_/¯

This would be a great feature, I wanna cook Pizza…or…Commerce business features similar to how UK does their businesses

For real I was about to say, I’ve been a normal citizen my entire time in Firestone, not a single job I’ve ever done here has paid me, not one. It’s either join departments, or become a criminal or was, at least now elected officials make money, back when I was doing it they didn’t. There being no way to be a citizen in firestone without sitting AFK in V2 is one of the main reasons I don’t go to V2. People start businesses, come up with ideas to advance normal citizen life, and there’s no way to even pay employees for the actions they do unless you take other means of making money.

Arson update when? I wanna burn down a select few buildings in the county

Agreed. Commerce businesses really need some form of a scripted payment system in V2. While it certainly shouldn’t be the only reason attracting private employees, it would be a nice added benefit and would perhaps even get rid of the stigma that departments are more official than businesses simply because they actually pay their employees.

I will say, Quest Expeditions has worked fairly hard to ensure our employees are properly compensated for their commitment. We have a plan in place where employees track the number of minutes they spend in-game with Quest and are then able to request payouts of FS Cash according to the number of minutes they accumulate. To request a payout, employees need a minimum of 120 minutes and are paid a pretty competitive wage. Here’s an example of our Tourism Agency’s Financial Plan: 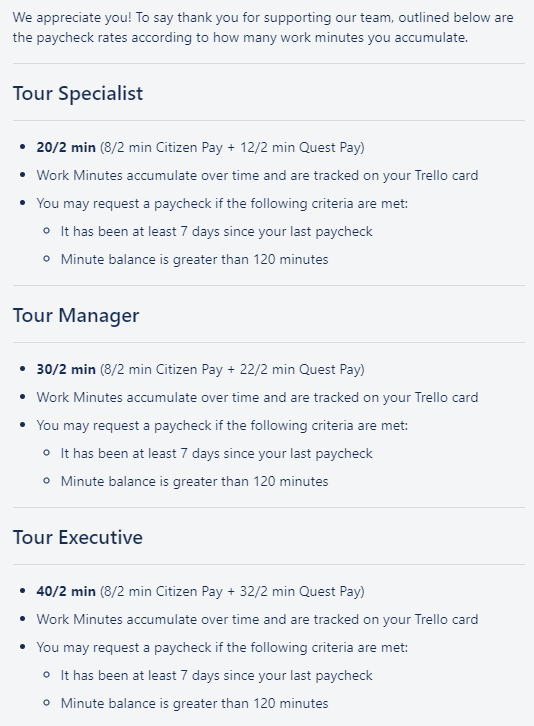 The only issue with this system is its long-term sustainability. At the moment, we don’t have much trouble paying our tight group of employees because we’ve been able to save up a good amount of money in the bank. We compile our funds into one account (Quest_Holder) and are able to payout our employees accordingly. However, the way we fill this account is with misc donations, tips at the end of each expedition, and the personal earnings of the founders of Quest.

With that, even though private businesses like Quest have a solid system right now, there’s a lot of uncertainty when it comes to ensuring we’re able to pay our employees in the long-term as we scale and become more active. I truly believe the key to maintaining an active county is to open up more opportunities financially for private businesses. Should that occur, the need to give criminals more money would begin to disappear as citizens become more invested and feel more rewarded in the private sector.

since v3 is probably gonna take another year this needs attention. not the system that you suggested, but something in this realm

go up to and talk to who will hire you to kill someone for X amount of money (maybe 500-1000?). This wouldn’t be abused though since after killing them once, the hit would be terminated and killing them would no longer give you a reward.

There is a game called ARMA 3, its like Gmod but military oriented. There is a gamemode called Altis life (Altis is the name of the main map). It functions similar to darkRP but its on a huge map and basic economy. There are legal ways to produce money, mining, drilling for oil, even fishing. But a huge zone of the map is “rebel territory”. Pretty much in these zones its kill on sight and a massive free for all. There are illegal ways to make money, producing drugs, robbing banks and other high security sites. But there are these things called cartels, and if you capture and hold them you get a percentage of the money whenever people sell illegal items. (If you capture the coke cartel you get a cut from all coke sales). It would be cool if something like this can be implemented in v2/v3.