Like the title states, remove Stapelton County from the hub and only put the games that arent used that often in the hub.

The hub breaks far too often, and instead of people having to queue, which doesn’t work half the time, just have people manually join like it was for years.

Example why SC should be removed from the hub because the hub is broken and buggy: 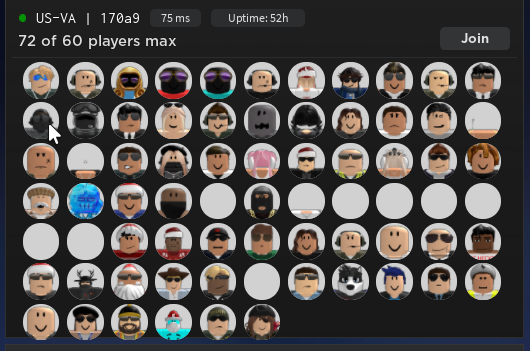 from my understanding, the hub slightly helps prevent exploiters (not sure)

agreed, I’m stuck on the “attempting to join game” screen 80% of the time and have to rejoin to fix it, losing my spot in queue

I personally would want to keep it if it weren’t buggy. The queue system Roblox uses is absolute dog and although it is buggier, I’d personally want it to stay.

the hub makes it slightly harder to access information like server IPs, and deters most auto-exploit tooling. additionally, it has an important privacy purpose, as it makes it harder for bots outside of Firestone to detect users that may be playing.

Example why SC should be removed from the hub because the hub is broken and buggy:

This is not the hub being ‘broken or buggy’. Game moderators and founders bypass the server limits.

If there are individual issues with the hub or queue system, you should probably report them separately.

I believe this is moreso problems with Roblox’s TeleportService being fairly unreliable.