So I saw this frustrated post from our friendly neighbourhood iiConfederateLaw: 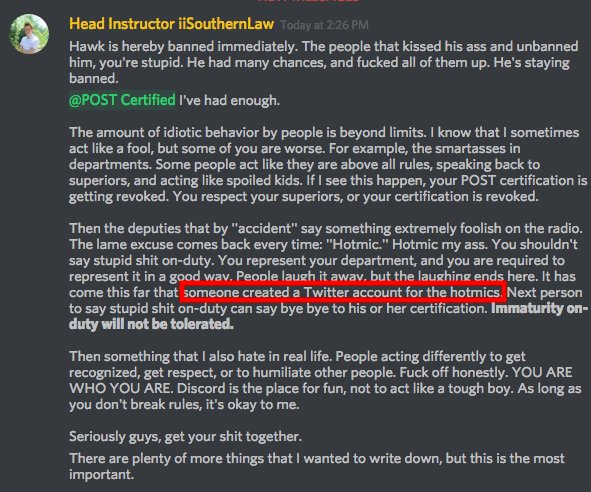 I won’t lie, he has a point. However the person speaking isn’t the problem.

We all make mistakes; even the sexiest and most perfect departments, cough BIG UP NATIONAL GUARD cough, and lose their concentration and mess up. It’s all part of a package when you’re in a team: Making mistakes so you don’t do them again.

Now of course people will make the same mistakes over and over because you don’t simply stop a mistake, you just reduce the chances of it happening again until you can consider those occurrences to be R A R E. However it means fuck all when there’s an account constantly posting those mistakes over the radio on social media where it’ll be there until the end of time. Yes I’m talking about that particular twitter account.

At first it was just a little banter and seeing people mess up over the radio, but then it got a little serious as shown by the screenshot above. Your mistakes are being observed closely now, and people are going to misinterpret your mistakes. Here’s an example:

This was a screenshot of the radio while testing out the weather system with Fed in the game. Since it was the development server, laws and professionalism didn’t really apply there and there were only LEOs to be honest, so we dicked about and had no concern for radio etiquette.

One SCSO boi got fired because of this. There was no caption, therefore SCSO HICOMM misinterpreting that screenshot. An understandable decision that should still accept an appeal. This was the same situation as me, had I not said that screenshot was in the test server I probably would have been looking at my second NG discharge.

I was thinking about suggesting that you keep these mistakes to a minimum but then I realised there’s only a certain group of people who can see emergency service communications… And that’s emergency services themselves.

Which means some of you are taking screenshots and then going through the effort to share it with that twitter page, so they can expose it to the rest of Firestone and laugh at your mistakes while you worry about the potential consequences…

You snitching bastards… You’re all the reasons why this is happening!

We have three appropriate actions we could take:

tl;dr - If you’re sick of your department looking the meme, enforce rules to prevent screenshots being shared all over.

PS: This is for people who are just upset about this, who I assume are like 2% of Firestone.

Hello, I am the user that runs Firestone Radio Fails. As stated by the twitter page, law enforcement agencies should attempt their best to not use hotmic as an excuse to the gibberish they post on the radio. Many of the posts under the twitter account are intentional for the sake of being put out there. We have reminded people not to do such things, as the twitter account is meant for legitimate hotmics and for the laughs. We do not condone harassment of individuals that have committed such act.

I love you too.

tl;dr - If you’re sick of your department looking the meme, enforce rules to prevent screenshots being shared all over.

@Blockguy75 so your not going to kill envelope and feed his body to the dogs? I wanted to see that so bad.

I’ve yet to reach a verdict.

Regardless, it’ll be public.

If you act stupid, it reflects on your department.
Personally, just work to make it second nature to make sure the radio is off, just as it’s second nature to press the space bar or press “/” to open chat.

It’s that simple, but you need to remember that there is legitimate mistakes that are made within the Law Enforcement community. Usually, we laugh about it and go “good meme” but there’s some people who do it intentionally, etc. Personally, behind these walls we’re all the same memey LEOs.