Greetings, fellow citizens of Arborfield as well as the great State of Firestone. Many of you may not know me as I don’t have any sort of history in Firestone, let alone Arborfield, except that I have seen it rise overtime and I have seen it’s immense amount of opportunity. My goal, if elected as The Peoples mayor, is to ensure that the citizens of Arborfield have a large say in legislative and community based decisions.

Why Should You Vote for Me? 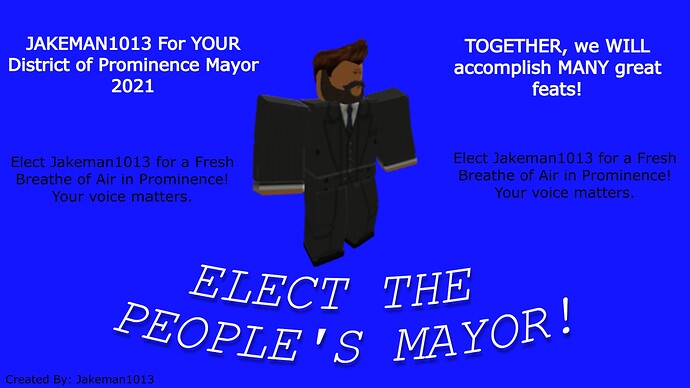 Never heard of you

Well, you are welcome to get to know me! I have very much potential, just because I have not indulged in Firestone so much does not mean I haven’t elsewhere. You can ask me anything I will answer with a truthful and honest answer, as mayor I would do my best to hear every citizen thoroughly and make sure their concerns and/or opinions are well considered. I would serve for the PEOPLE! Not for my own personal endeavors.

Explain how you will manage to get the device to increase the wage.

Very good question. I’d collect signatures on a petition to increase district allowances by 4 dollars every 3 and a half minutes. I’d then bring that petition to either the Governor or a Senator. That is all I can say as of now regarding that topic. Any other questions?

Your banner says Prominence mayor but the text says Arborfield, which one?

The banner was made in a hurry, I do have plans for Arborfield that are in the works even right now as we speak. In the works as in being thought-out and elaborated

i dont think u know what a mayor is gonna do. as a former mayor ur way off, and the banner has the wrong city. no support and plz dont give me some dumb comment about how to fix it because it never happens.

I support THE PEOPLE’S MAYOR!

no support, I’m super confused about what you want to do and what you’re running for??

concerned when you were lt governor in rockport

and rockport is trash anyways so.

On a budget? Looking to promote your election campaign? Use PosterMyWall as a one stop shop to design vibrant posters to inform your voters of the right choice. Our drag and drop and template based editor is easy to learn and easy to use, with great...

deadass creates an account, comes in here, calls himself the peoples mayor, and makes some bad gfx
sorry no support

How will you get the things done in your agenda? Seems like a lot.

NO THIS ELECTION WAS STOLEN FROM THE PEOPLE’S MAYOR!