Discussion on "A Constitutional Amendment to Enable Firearms Regulation"

Recently, this amendment to the constitution was proposed: A Constitutional Amendment to Enable Firearms Regulation

This amendment effectively allows the government to regulate any and all firearms (legal or not legal) in any way. It effectively takes away the little rights that many citizens have right now within Firestone.

Currently, the constitution states that “Any and all citizens of the State of Firestone shall have the right to possess and utilize a firearm. Firearms may be regulated to maintain domestic serenity through appropriate legislation.”

The new amendment takes way the requirement for regulating and instead just says, “Firearms may be regulated through legislation”. This is VERY dangerous as the right to own a firearm is taken away and instead is made into a privilege instead of a right. Currently, the system works as congress can’t straight up ban guns within the state as that would be unconstitutional; however, with this new wording it would be possible to ban guns all together by making it illegal to purchase a firearm for example. It gives the government infinite power in regulating without any barriers (such as right now in which it can only be used to maintain domestic serenity).

I encourage everyone to read the proposed amendment for themselves then make a decision on the matter. If you are against this, make sure to contact your congressperson. 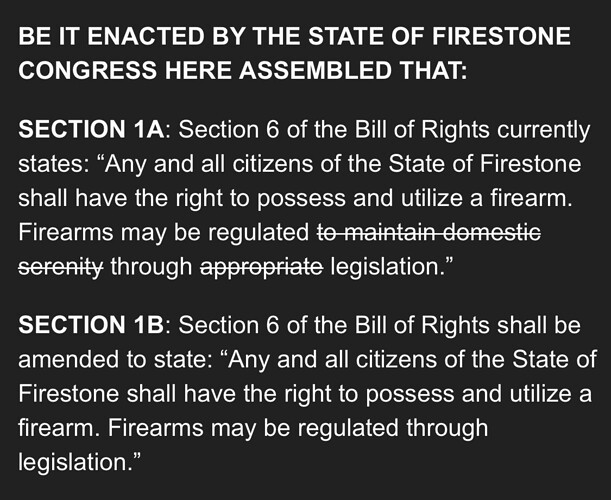 please dont say it isnt a right anymore when it still very much is! : )

also the government can’t regulate making the purchase of a gun illegal. the supreme court is there to literally defend that right and perform a judicial review and also hear cases (if shark ever votes there would be a third justice!!)

i don’t believe in making up these things of what the legislative can do and acting like it’d be constitutional.

as of right now having a gun license is a privilege anyways, you have to attend a training and then take a exam??? and then follow laws surrounding guns nonetheless. its literally a privilege right now like lol

I am the author of this amendment.

Gun ownership already is a privilege, and not a right, in this state — this is something you ought to know as a CFCT Instructor.

The purpose of this amendment is to enable for things like ‘guns on duty’ policies (which are arguably illegal at this time), there is no way that an act (which, mind you, is harder to pass than a constitutional amendment) unduly restricting firearms would pass and be signed.

The slippery slope argument doesn’t apply here, because this isn’t actually regulating firearms — any regulations would have to pass both houses and be signed.

While I’m not gonna give my personal opinion on the amendment, I am gonna ask: why is it legally necessary? I have been in the judicial system, in various capacities, for like three years. We have, I shit you not, never had a legit case over the gun rights provision in the BOR. It has never been interpreted—never needed to be. And, frankly, “maintain domestic security” is broad enough to give the government pretty good leeway with gun control, yet they never really use it. Really, the only gun control laws we have is the UCFA, which is less gun control and more establishing the means of gun control. Hell, the UCFA’s actual gun control provisions amount to: don’t shoot people for no reason, don’t bring a gun to government buildings, don’t do crimes with a gun, and please obtain a license. This is pretty basic shit that has functioned well legally and socially since I wrote the damn thing years ago.

So I suppose my ultimate point is that the government has had a reasonably broad mandate to regulate firearms for years, has rarely used that power, and for some reason wishes to drastically expand it now.

you can do that? doesn’t the game like doesn’t let you if you aren’t in the CFL database.

You gotta have a CFL for the GUI to work.

they already have enough firearm regulation power we don’t need to basically make it unlimited short of making purchasing any firearm illegal.

Gun ownership already is a privilege, and not a right, in this state

Can we just remove the entire amendment then? It’s pointless at this time to say citizens have the right to possess and utilize firearms but in reality that can be regulated severely.

Like you said, if the first sentence doesn’t mean anything, then why do we have it?

yeah, idk why this needs an ammendement. Even tho maybe CFL warriors and the ones that for some reason buy an AK are annoying. I don’t think guns need more regulations.

They have department issued firearms, you don’t see LEO’s buying guns in real life while on duty to my knowledge.

How is gun ownership not a privilege when you literally have to do CFCT and then the Exam.

If it was more of a right, you wouldn’t really need to do those things.

I don’t really care either way

Unless something is wrong with Trello, it was never submitted

if that is your argument

why do any gun control on a roblox game?

I haven’t seen a LEO ever buy a gun from a gun shop. Game doesn’t even allow you.

As a Canadian, we have stricter gun laws, so I’m for this since guns are ridiculously common, and abuse of firearms isn’t something we can consider rare in Firestone.