This is not my speech, I am posting this on behalf of AdamRumsfled. The previous Senate speech is considered redacted and now used for House elections.

This evening I have been apprised by the call to fill a current vacancy within the Firestone State House. For the very few of you who may find my username familiar, you might remember me as an active member of the United Nations and other various roleplaying groups largely similar to the State of Firestone. For everyone else, however, I come unheard of.

My name is AdamRumsfeld. My account was breached back in November of 2018 where I had ended up losing many of the assets that I had owned. A few months ago, I was able to finally recover my account and just recently decided to dive right back into the world of government/realism roleplay. I must say that I am incredibly impressed with the community that has been built here, and it is definitely larger than what it was at a glance a few years ago.

After reading numerous election speeches here on Firestone, one similarity is that almost every candidate has expressed their desire to “help others” and “make sure that everybody is being represented”. They all make the same promises, and most of them say the same thing, word for word. What most of them don’t tell you is that they’re running for Congress because they have a desire to learn. To not make the same mistakes that almost everyone before them has made. So with that being said, what I can promise to be is somebody who doesn’t drag the Senate back into the past and instead brings it forward.

I know that this speech isn’t very long but why would it need to be? Let’s allow ourselves to make a comeback and finally be proud of the work that we’re going to soon accomplish together.

Thank you for your time.

Endorsed and supported. This man is very smart and I think he will be a capable congressman if elected.

support hes the only one ive seen able to put capable sentences together with words bigger then a 8th graders vocabulary. hopefully he can do the same writing legislation 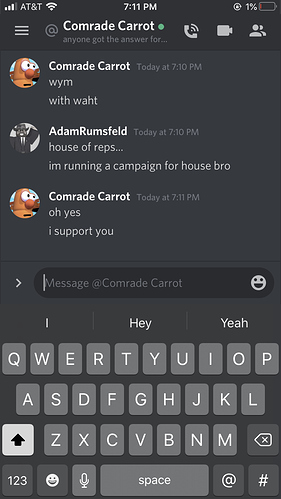 House of Representatives Special Elections of August Voting Available positions: 2 Election Sponsor: Speaker of the House, Joshernaut Rank: Representative - PRIMARY General Regulations/Information Campaigning forum post cannot of been made before this post. Slander of other candidates will result in immediate disqualification. You are allowed to hold another occupation during the time of the election period but must resign if you win a seat. All other election rules & laws apply. Electi…