A Senate Resolution to Create the Senate Judiciary Committee

A Senate Resolution to Create the Senate Judiciary Committee

Be it enacted by the State of Firestone Congress here assembled that:

Section 1: the Senate Judiciary Committee (SJC) shall be created.

Section 2: The purpose of the SJC shall be to; evaluate judicial nominees, evaluate the effectiveness of the Judicial Branch as well as the Department of Justice-giving both recommendations and making necessary legislative changes, hearing the opinions of the aforementioned groups, and reporting on all of the above.

Section 3: The SJC shall have two Senators as members and one Senator as the Chairman.

Section 3B: The Chairman shall be appointed by a vote of the Senate. The Presiding officer, when there’s a vacancy, will call for nominations. All those who wish for the position will be voted on, the one with the most votes in favor winning. If there is a tie the PO will break it.

Section 3C: The Chairman may, when there’s a vacancy, appoint a Senator to the committee.

Section 3D: The Chairman may be removed by a Senate Resolution if need be.

Section 4: Members of the SJC shall serve until the Congressional Term is over or until they resign or are removed.

Section 5: A member may be removed by the Chairman for inactivity, incompetence, or bias.

Section 6: The Firestone State Senate shall be tasked with enforcing this resolution.

Section 7: This shall go into immediate effect upon being passed by the Senate.

Section 8: All, laws in conflict with this are rendered null and void. 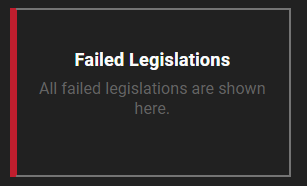 There is a section